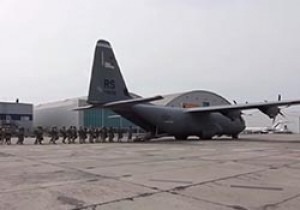 During 2015 and 2014 Balkan NATO combat drills near the Russian border areas, the 173rd Airborne Paratroopers have jumped over Hungary, Estonia, Slovakia, and Latvia.

The commander of the 173rd Airborne Brigade, Col. Michael Foster, spoke recently at the CSIS | Center for Strategic & International Studies in Washington, D.C. about the role the brigade has played in United States Army Europe - USAREUR with US NATO allies in “Operation Atlantic Resolve” and the brigade's future in Europe.

United States Army Europe - USAREUR Commanding General is Lt. Gen. Ben Hodges.United States Army Europe - USAREUR paratroopers from the 173rd Airborne Brigade Support Battalion conduct their airborne operation from the Aviano Air Base onto Juliet DZ in Pordenone, Italy and bases in Germany. In March 2015, the US Defense Department has sent six hundred warfighters of the US Army 173rd Airborne Brigade to Kiev Ukraine. This was the same “piecemeal” 600 number that was sent to Latvia for combined combat and weapons training. Latvia joined NATO in 2004. It is expected that Ukraine will also join NATO before the US Presidential Elections 2016.