NATO and its Partners Move Closer to Ukraine 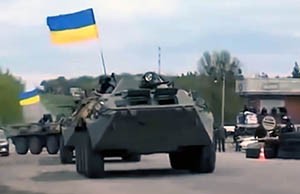 “A new report by the United Nations human rights monitors in Ukraine says that nearly 8,000 people have died and 17,811 have been wounded in the conflict which erupted in April, 2014 and has recently tapered off in the eastern part of the country.”

On September 22, 2015, NATO’s Secretary General, Jens Stoltenberg traveled to Kiev Ukraine and signed several cooperation agreements in the areas of training, NATO regional headquarters in Kiev, and command and control systems for the Ukraine Army. “The Minsk Agreement remains the only way out of the crisis and to restore Ukrainian sovereign control over its own borders. NATO fully supports the efforts within the trilateral contact group and the Normandy format to find a political solution. I welcome the renewed effort to fully implement the Minsk Agreements,” spoke Stoltenberg. Ukraine’s President emphasized that “Ukraine now needs not lethal weapons but new potential…”

The Atlantic Council reported that “NATO's military commander, Gen. Philip M. Breedlove, now supports providing defensive weapons and equipment to Kiev's beleaguered forces, and an array of administration and military officials appear to be edging toward that position, American officials were quoted.”  President Obama made no decisions on providing such lethal assistance. However in his United Nations’ speech on the 28th of September 2015, he spoke that “America has few economic interests in Ukraine. We recognize the deep and complex history between Russia and Ukraine. But we cannot stand by when the sovereignty and territorial integrity of a nation is flagrantly violated. If that happens without consequence in Ukraine, it could happen to any nation gathered here today. That’s the basis of the sanctions that the United States and our partners impose on Russia. It’s not a desire to return to a Cold War. “

Outgoing General Martin E. Dempsey, the chairman of the Joint Chiefs of Staff, had backed sending defensive weapons to the Kiev Ukrainian Military Forces. Dempsey stated, “Hybrid conflicts also may be comprised of state and non-state actors working together toward shared objectives, employing a wide range of weapons such as we have witnessed in eastern Ukraine…it is likely that this form of conflict will persist well into the future.”

The 2015 QDR Defense Report revealed that the $496 billion U.S. defense budget did not specific the supply of arms to Ukraine as a mission statement. In the QDR, it was clear that the U.S. has pivoted its forward forces to Africa and the Pacific. On the contrary, the wars for the U.S. from 2001 to 2011 cost $2.8 trillion dollars and continued to mount for the next four years to an estimated additional $210 billion dollars. The U.S. is not in any appetite to be a partner waging war in Eastern Ukraine. However, John McCain and other members of the U.S Congress are urging that the U.S. DoD send Ukraine billions of dollars’ worth of anti-armor missiles, reconnaissance drones, armored Humvees, and radars that can determine the location of enemy rocket and artillery fire.

On the record, James G. Stavridis, who served as the top NATO military commander, and Ivo Daalder, an ambassador to NATO believed that direct military assistance was the only way to take back Eastern Ukraine from DPR (Donbas Peoples Republic) and LPR (Luhansk Peoples Republic).

The Minsk agreement is being followed by both the Republic militia forces and the Kiev Army. It is clear that the IMF, the European Central Bank, and potential investors do not want the war in Ukraine to continue. Peace and prosperity appears to be on the minds and lips of politicians and ordinary Ukraine citizens (in the West and the East) and members of the Ukraine Army. Front runner of the U.S. GOP presidential race, Donald Trump, has emphasized that the challenges posed by Russia’s annexation of Crimea should be resolved by Europeans. Ukraine is not a member of NATO and bilateral agreements are but diplomatic approaches to unsolvable problems.