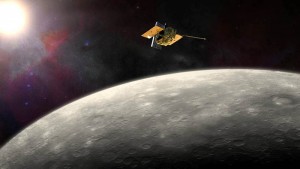 “Mercury is a planet in the Earth’s solar system. It is the smallest of the eight planets. Mercury is a little bigger than Earth's moon. It is made of heavier materials, like iron. But if you could weigh Mercury and the Moon, Mercury would weigh a lot more. Mercury is heavy, but it is small. It would take more than 18 Mercury’s to be as big as Earth. Mercury goes around the sun the fastest of all the planets. Mercury has no moons. The Romans believed that gods and goddesses were in charge of everything on Earth. Mercury is named after the messenger for their gods. The Roman Mercury had wings on his helmet and shoes. He could travel very quickly from place to place. “

The American National Aeronautics and Space Administration (NASA) released a report that the planet “Mercury passes between Earth and the sun only about 13 times a century, and it was seen on May 9, 2016. Three NASA satellites provided images of the transit.”

The spacecraft was designed and built by Applied Physics Laboratory (APL). The lab manages and operates the mission for NASA's Science Mission Directorate. The mission is part of NASA's Discovery Program, managed for the directorate by the agency's Marshall Space Flight Center in Huntsville, Alabama. The spacecraft traveled more than six and a half years before it was inserted into orbit around Mercury on March 18, 2011.

The prime mission was to orbit the planet Mercury and collect data for one Earth year. The spacecraft’s healthy instruments, remaining fuel, and new questions raised by early findings resulted in two approved operations extensions, allowing the mission to continue for almost four years and resulting in more scientific firsts. 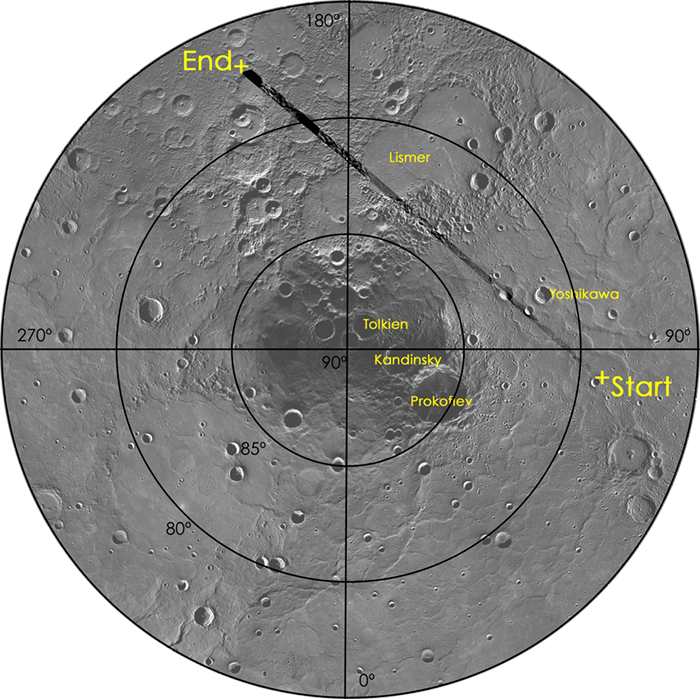 The Mercury Atmosphere and Surface Composition Spectrometer (MASCS) instrument aboard NASA's MESSENGER spacecraft was designed to study both the exosphere and surface of the planet Mercury. To learn more about the minerals and surface processes on Mercury, the Visual and Infrared Spectrometer (VIRS) portion of MASCS has been diligently collecting single tracks of spectral surface measurements since MESSENGER entered Mercury orbit on March 17, 2011. The track coverage is now extensive enough that the spectral properties of both broad terrains and small, distinct features such as pyroclastic vents and fresh craters can be studied. To accentuate the geological context of the spectral measurements, the MASCS data have been overlain on the monochrome mosaic from the Mercury Dual Imaging System (MDIS), an instrument with wide- and narrow-angle cameras to map the rugged landforms and spectral variations on Mercury’s surface. “The front side of the sunshade routinely experienced temperatures in excess of 300° Celsius (570° Fahrenheit), whereas the majority of components in its shadow routinely operated near room temperature (20°C or 68°F),” said Helene Winters, mission project manager at APL. “This technology to protect the spacecraft’s instruments was a key to mission success during its prime and extended operations.”

“The MESSENGER spacecraft is the first ever to orbit the planet Mercury, and the spacecraft's seven scientific instruments and radio science investigation are unraveling the history and evolution of the Solar System's innermost planet. In the mission's more than four years of orbital operations, MESSENGER has acquired over 250,000 images and extensive other data sets. MESSENGER's highly successful orbital mission…”

Although Mercury is one of Earth’s nearest planetary neighbors, little was known about the planet prior to the MESSENGER mission. “For the first time in history we now have real knowledge about the planet Mercury that shows it to be a fascinating world as part of our diverse solar system,” said John Grunsfeld, associate administrator for the Science Mission Directorate at NASA Headquarters in Washington. “While spacecraft operations will end, we are celebrating MESSENGER as more than a successful mission. It’s the beginning of a longer journey to analyze the data that reveals all the scientific mysteries of Mercury.”  One key science finding in 2012 provided compelling support for the hypothesis that Mercury harbors abundant frozen water and other volatile materials in its permanently shadowed polar craters. Data indicated the ice in Mercury's Polar Regions, if spread over an area the size of Washington, would be more than two miles thick. For the first time, scientists began seeing clearly a chapter in the story of how the inner planets, including Earth, acquired water and some of the chemical building blocks for life. A dark layer covering most of the water ice deposits supports the theory that organic compounds,  as well as water, were delivered from the outer solar system to the inner planets and may have led to prebiotic chemical synthesis and, thusly, life on Earth.

“The water now stored in ice deposits in the permanently shadowed floors of impact craters at Mercury’s poles most likely was delivered to the innermost planet by the impacts of comets and volatile-rich asteroids,” said Sean Solomon, the mission’s principal investigator, and director of Columbia University's Lamont-Doherty Earth Observatory in Palisades, New York. “Those same impacts also likely delivered the dark organic material.” In addition to science discoveries, the mission provided many technological firsts, including the development of a vital heat-resistant and highly reflective ceramic cloth sunshade that isolated the spacecraft’s instruments and electronics from direct solar radiation – vital to mission success given Mercury’s proximity to the sun. The technology will help inform future designs for planetary missions within our solar system.

“The mission came to an end on April 30, 2015, as the spacecraft ran out of propellant and the force of solar gravity causes it to impact the surface of Mercury.  ASA’s Mercury Surface, Space Environment, Geochemistry, and Ranging (MESSENGER) spacecraft  impacted  the planet at more than 8,750 miles per hour (3.91 kilometers per second) on the side of the planet facing the other side of Mercury. Originally planned to orbit Mercury for one year, the mission exceeded all expectations, lasting for over four years and acquiring extensive datasets with its seven scientific instruments and radio science investigation. On April 30, 2015, the spacecraft succumbed to the pull of solar gravity and impacted Mercury's surface. The spacecraft struck the planet just north of Shakespeare basin.”

According to Robert Lee Hotz, “NASA’S Kepler Space Telescope has confirmed 1,284 newly discovered planets around distant stars…” Nine of those are habitat able for humans as they have warm zones that could have water. About 550 are rocky like the Earths Mountains, and 100 are the size of the earth. The findings can be read in the Astrophysical Journal published on May 10, 2016. A new fantastic journey awaits future space explorers in the centuries ahead.