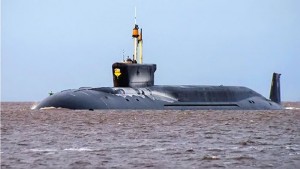 The McKinsey report,* Defense outlook 2017: A global survey of defense-industry executives, “defense executives believe that the Middle East, India, and the United States are the three most attractive markets.

Those who expect competition from the outside see cybersecurity, gaming technologies, unmanned equipment, and satellite launch as the products ripest for disruption. The changes from 2012 to 2014 are clear. Defense executives are more aligned and more optimistic about the global defense market. In their view, defense spending is shifting rather than declining outright. Growth is uncertain but achievable. When asked how many points of margin improvement they were targeting over the next three years, all respondents answered with modest growth of between 1 and 5 percent. Identifying the main trends and harnessing the shifts can lead to continued growth in the defense industry. The outlook for 2017 is increasingly international and complex, but it is not without opportunity.”

The US GAO Government Accounting Office stated that “The (American) federal government’s annual budget for developing and acquiring major defense, homeland security, and space systems is about $90 billion. These systems include fighter aircraft and submarines, electronic baggage screening equipment, and telescopes intended to explore the universe each of which will cost billions of dollars to acquire…After the Soviet Union launched the first satellite into orbit in 1957, the U.S. government made a commitment to initiate, rather than react to, strategic technological surprises. DOD relies on Defense Advanced Research Projects Agency (DARPA)’s disruptive innovations to maintain this promise, backed by congressional appropriations of over $2.9 billion in fiscal year 2015 alone. In April 2015, DOD reported that U.S. technological superiority is again being challenged by potential adversaries and renewed efforts to improve its products. Meanwhile, GAO found deficiencies in DOD's technology transition processes that may hinder these efforts and DARPA's goals.”

Nikolai Novichkov, a JDW Researcher, wrote that, “Russia’s 2015 Maritime Doctrine divides Russian naval policy between six regions: Atlantic, Arctic, Antarctic, Caspian, Indian Ocean, and Pacific.The focus of the doctrine is on two of these regions: the Arctic and the Atlantic.The Atlantic has been emphasized because of the EU and the US encouraging NATO expansion, the need to integrate Crimea and the Sevastopol naval base into the Russian economy, and to re-establish a permanent Russian Navy presence in the Mediterranean.

Among these, priority will be given to supporting Russia's ballistic missile submarines (SSBNs) and nuclear attack submarines (SSNs) within the Northern and Pacific fleets.

Additionally, the doctrine seeks to create a general-purpose marine force armed with long-range and high-precision strike systems capable of providing a non-nuclear deterrent. The doctrine also foresees the introduction of new and innovative technologies such as: artificial intelligence systems, unmanned aerial, surface and underwater vehicles (UAVs, USVs, and UUVs), non-lethal weapon systems, and new weapon types such as directed-energy weapons.

Russia will now look to create a single, integrated, and jam-proof fleet-wide C2 system for use at all levels from the strategic to the tactical. This is intended to be adaptable and to form a single information control complex to enable network-centric command of diverse naval and joint-service assets in any theatre of operations.” 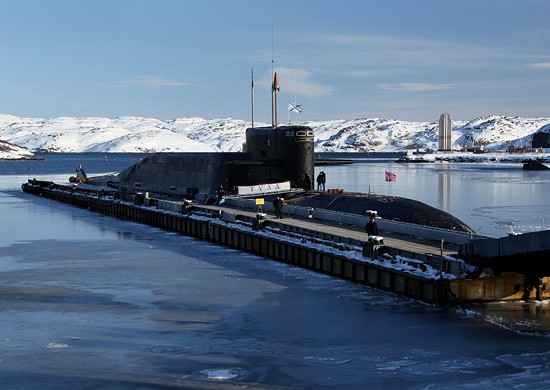 Up until 2020 the maritime strategic nuclear force will focus on completing the development and launching of its fourth-generation Borey-class (Project 955/955A) SSBNs, while maintaining its remaining Delta III/IV-class (Project 667BDR/667BDRM) SSBNs in operational service. In the midterm the non-nuclear deterrent will be provided by Yasen-class (Project 885M) SSNs and Oscar-class (Project 885M) nuclear-powered guided missile submarines (SSGNs). Long-term plans (by 2050) also call for a transition to modular combat platforms for both surface ships and submarines.”

A NPS carries 16 SS-N-32 Bulava submarine-launched ballistic missiles (SLBMs).In late 2013, Russian sources had reported that the ship Alexander Nevsky and Borey-class ship Vladimir Monomach have been transferred to the Pacific Fleet…It is believed that the Vladimir Monomach would launch a Bulava SLBM from Northern Fleet waters in late 2015, before making its inter-fleet transit in the second half of 2016.”

As reported by IHS Janes, “The Russian Navy's next generation of increasingly capable SSBNs - in the form of the Dolgoruky (Borey)-class Project 955/955A boats - is already entering service. Of a planned class of eight boats, the first three have been commissioned and all boats are slated to enter service by 2020…the most recent missile tests, carried out in late 2014, were successful. The boats will carry 16 SLBMs. Four of the class will be based in the Pacific; the Russian defense ministry reported that boat two, Alexander Nevsky - which, according to the Russian General Staff, has already conducted under-ice transits …submarine builder Sevmash announced in June 2015 that the keel of boat seven would be laid in December 2015.Russia aims to complete delivery of six Improved Kilo boats to the Black Sea Fleet before 2020. Third-in-class Stary Oskol is scheduled to deploy to the Mediterranean in 2016.” 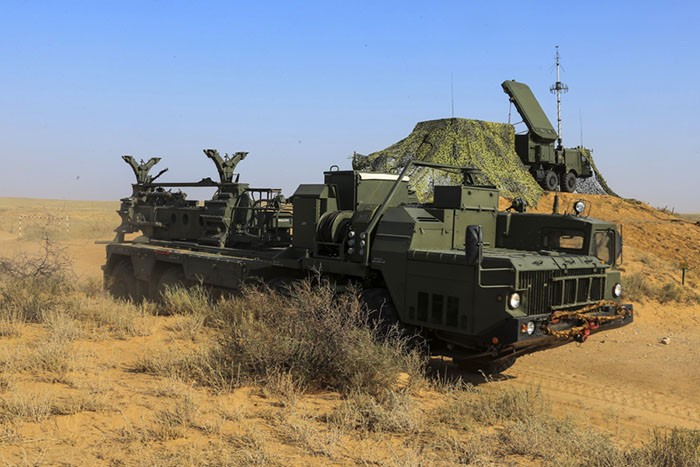 The Strategic Missile Forces (SMF) are an Arm of the Armed Forces of the Russian Federation, the main component of its Strategic Nuclear Forces (SNF). They are designed for nuclear deterrence of a possible aggression and, as a part of the SNF or on their own, for defeat of strategic objects located in one or more strategic air-space areas and forming the basis of the enemy’s military and military-economic potential by means of large-scale, group or single nuclear missile attacks. 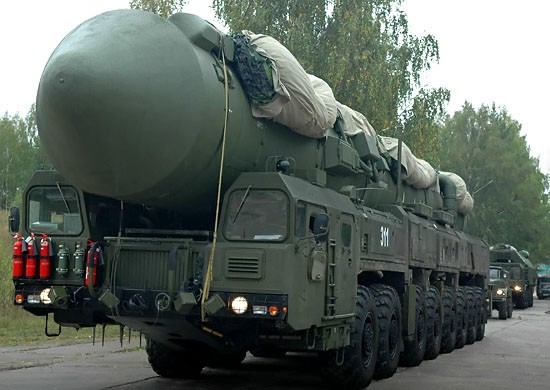 Russia’s land based missile regiments consist of Topol, Topol-M, and Yars mobile missile systems. According to Russia’s Ministry of Defense, “missile troops continue to conduct patrols in the nuclear complex "Topol" and "yars". In 2015, the Strategic Missile Forces command checked about 200 units. On the eve of a Kapustin Yar in the Astrakhan region was produced by test-fired an intercontinental ballistic missile "Topol". Study of a missile with a given accuracy struck a conditional goal on Sary-Shagan in Kazakhstan. Intercontinental ballistic missile RT-2PM2 Topol’-M unified for silo and mobile basing modes.”

Yuri Solomonov, chief designer at the Moscow Institute of Thermal Technology (MIIT), told RIA Novosti. Solomonov, who designed Russia’s submarine-launched Bulava ballistic missile and Topol-M ballistic missile, said some defense systems could target a missile in flight within five to 10 minutes after its launch. "This would mean war, a system like this must not be used," he added, saying the US government was pouring funds into the PGS program.