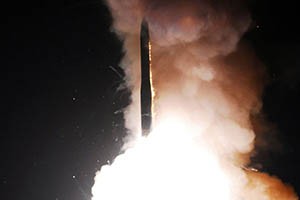 to demonstrate to “adversaries” its ability to retaliate against missile attacks.

On April 10, 2015, the US Air Force Global Strike Command (AFGSC) announced that it “conducted the Giant Pace 15-1M Simulated Electronic Launch-Minuteman (SELM) test near Malmstrom Air Force Base (AFB), Montana, US. The test represents the second part of a complete weapon's system evaluation, which saw an unarmed Minuteman III missile launched from Vandenberg AFB, California, splashing down in a pre-established test area in the Pacific Ocean near the island of Guam.

341st Missile Wing commander Colonel Tom Wilcox said: "This displays to our allies and potential adversaries that the Minuteman system is still viable and provides awesome deterrence for the nation every day." “Two launch control centers (LCC) were involved in the trial, as were six launch facilities (LFs) including the K-09, which slid open its 100ton launcher closure door into a 12ft-high sand berm, signaling the end of the test…It enables missile wings throughout AFGSC to evaluate the reliability of the LGM-30 Minuteman intercontinental ballistic missile, stopping just before first-stage ignition. Combined with Minuteman missile launches from Vandenberg AFB, the data gathered from SELM tests provides invaluable information to leaders throughout the command.

The LGM-30 Minuteman III is built by Boeing. It is a ground-based, long-range, solid-fuel, three-stage intercontinental ballistic missile designed to carry single or multiple nuclear warheads.

The missile forms one component of a nuclear triad that is complemented by the Trident submarine-launched ballistic missile, and by nuclear weapons carried by a long-range strategic bomber aircraft.” In January 15, 2014, the UKS Air Force Revealed that 34 Nuclear Officers were involved in cheating and drugging at theMalmstrom Air Force Base (AFB), Montana, US.  As reported by ABC news, “There are 600 launch officers responsible for operating the Air Force's fleet of 450 Minuteman III intercontinental ballistic missiles (ICBMs). Three bases are responsible for 150 of the missiles each, they are: Malmstrom AFB, in Montana; Minot AFB in North Dakota; and F.E. Warren AFB in Wyoming. The launch officers spend 24 hours shifts in underground launch centers where they are responsible for ICBM missiles based in missile silos in the surrounding countryside. USAF General Welsh said that the investigation determined that the officers had "electronically shared" answers via text messages for the monthly proficiency test conducted in August and September 2014. Seventeen of the officers were directly involved in the cheating while the others were aware of it but did nothing about it.