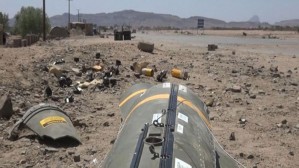 Cluster munitions are containers that explode in the air to distribute smaller bombs over a large area. They cover a “.6-mile radius to attack enemy troop formations and armor.” EU countries that manufactured cluster bombs were Germany, Belgium, Ireland, Italy, Luxembourg, Switzerland and the Netherlands.

A total of sixteen countries continue to produce cluster munitions or reserve the right to produce in the future, but only three of these states are known to have used the weapon; namely,the United States, Israel, and Russia. As of August 17, 2015, the United States had not signed the 2008 Convention on Cluster Munitions. According to the Cluster Munition Coalition (CMC) report of 2015, “during 2014, eight Sovereign States including France, Germany, Italy, and Japan destroyed a total of 121,585 cluster munitions and 16.4 million sub-munitions. Also, since September 2014, Japan and Canada have completed their stockpile destruction. A total of 34 states have developed or produced more than 200 types of cluster munitions. Records show that the U.S. used cluster bombs in Afghanistan, Albania, Bosnia and Herzegovina (BiH), Cambodia, Grenada, Iran, Iraq, Kuwait, Lao PDR, Lebanon, Libya, Saudi Arabia, Sudan, Vietnam, Yemen, former Yugoslavia (Kosovo, Montenegro, Serbia). “The major users and producers of cluster munitions: Israel [Israel Military Industries (IMI)], Russia [Rostekhnologia], and the U.S. (Textron Systems).”

According to the U.S. State Department (John Negroponte), cable 07ABUDHABI876 dated 24 May 2007, “The United States will not approve any cluster munitions or white phosphorus.” The update on casualties from cluster munition airstrikes and shelling in Syria and Ukraine were recorded in 2014. In 2012 and 2013, the only cluster munition casualties from attacks were in Syria against ISIS military installations. Russia is operating in the Syrian War against ISIS and its allies. It is stated by film analyst that the RBK-500 SPBE-D, RBK-500 SHOAB-0,5 and RBK-500 AO-2,5RTM cluster bombs were seen on Russian aircraft deployed in Syria. Rostekhnologia is one of the Russian manufacturers.From 2012 through to the end of 2014, at least 1,968 cluster munition casualties were reported in Syria.

Textron Systems manufacturers the “first safer cluster bomb”; namely, Textron's CBU-105s performs under this high international safety standard. Textron management made a major step forward for making safer cluster munitions. After the 2008 treaty, America agreed to a safe policy that would end its use and export of cluster munitions by 2018, but with the caveat that the export restriction would not apply to those that would detonate 99% of the time.The U.S. Defense Department and Textron can now negotiate foreign export contracts or provide cluster munitions with a one percent failure rate, and they are to be used only on “specific military targets” where civilians are not present.

Textron’s Sensor Fuzed Weapon (SFW) is a smart air-to-ground area weapon designed to defeat moving and fixed targets on land and at sea. With several proven features to prevent hazardous unexploded ordnance, the SFW is the only weapon of its kind in the U.S. Air Force inventory. The use of US-Textron manufactured and supplied CBU-105 cluster munitions by a Saudi Arabia-led coalition in Yemen in 2015 is raising questions about whether US transfer requirements are being met

On September 6, 2002, Barak Hussein Obama, a junior Senator from Illinois, and candidate for the U.S. Presidency, voted yes to an amendment by Senator Dianne Feinstein to ban cluster bombs when civilians were present. As a senator from New York, “Hillary Clinton voted to let our (U.S) military continue to use cluster bombs in areas with concentrated civilian population.” Prior to leaving office, “Defense Secretary Robert M. Gates stated that eliminating cluster munitions from US stockpiles would put the lives of our soldiers and those of our coalition partners at risk."