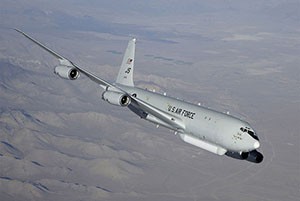 The joint surveillance and target attack radar system (JSTARS) was “a joint development project of the US Air Force and Army which provides an airborne, stand-off range, surveillance and target acquisition radar and command and control center. JSTARS (was to provide) ground situation information through communication via secure data links with air force command posts, army mobile ground stations and center of military analysis far from the point of conflict. JSTARS (was to provide) a picture of the ground situation equivalent to that of the air situation provided by AWACS. JSTARS’s (was designed to be) capable of determining the direction, speed and patterns of military activity of ground vehicles and helicopters.

Platform: The Boeing 707-300 series aircraft is the JSTARS airframe. The aircraft are remanufactured at Northrop Grumman in Lake Charles, Louisiana, then transferred to the Battle Management Systems Division in Melbourne, Florida where the electronics (were) installed and tested. The propulsion system of the E-8C JSTARS aircraft consists of four Pratt & Whitney P&W JT8D-219 engine turbojet engines, each providing + 18,000lb of thrust. The aircraft has a flight endurance of 11 hours or 20 hours with in-flight refueling. 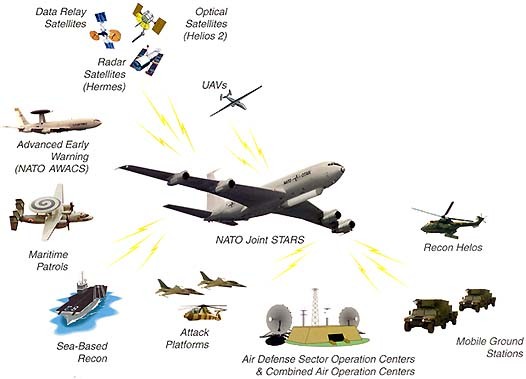 Radar System: The unclassified out-of-date version of the radar system was produced by (NG) Northrop Grumman Norden Systems (closed by NG on December 23, 2013-employed 4800 in the 1980s). “A 24ft antenna (was) installed on the underside of the aircraft, which is mechanically swiveled and pointed to scan in elevation, and scans electronically in azimuth to determine the location and heading of moving targets. The main operating modes of the radar are wide area surveillance, fixed target indication, synthetic aperture radar, moving target indicator and target classification modes. The (classified version) of the radar is an electronically scanned 2D X-band active aperture radar which will have a helicopter detection mode and inverse synthetic aperture (ISAR) imaging capability, as well as MTI (moving target indicator) mode, allowing real-time imaging of moving objects.”

According to a 2014 US Defense publication, “the architecture of AESA radar arrays advanced wide area targeting on platforms like advanced fighters. “Understandably, the USAF wanted this capability for its reconnaissance aircraft. A new AESA radar called MP-RTIP was originally developed for the (canceled) E-10A JSTARS replacement, with a claimed 5x – 10x resolution improvement over the JSTARS’ APY-7. A smaller version will now be mounted on Global Hawk Block 40 UAVs, and one obvious approach would be to equip E-8s with a full-size MP-RTIP or a similar radar… The JSTARS Radar Modernization (JSRM) replaced 2 radar receivers with 1 modern receiver, improving resolution and tracking. 2011 tests added a keel beam accessory bay (KAB) behind the APY-7 radar, and installed a high-resolution MS-177 multispectral camera for sub 1-meter resolution and target identification. The KAB could accommodate other sensors instead, which would add flexibility to the platform. A February 2013 test even added MP-RTIP, after a fashion. It showed that E-8s could stream MP-RTIP radar data from a RQ-4B Block 40 UAV for analysis on board, then use the E-8’s superior communications systems to distribute the results.” 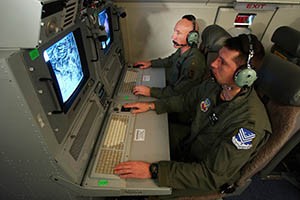 Command and Control: “JSTARS aircraft have 17 operations consoles and one navigation / self-defense console. A console operator can carry out sector search focusing on smaller sectors and automatically track selected targets. Fixed high value targets (were) detected through Synthetic Aperture Radar (SAR). JSTARS aircraft (were) being fitted with Force XXI Battle Command, Brigade and Below (FBCB2) 'Blue Force' tracking, which significantly improves the ability to locate and track the movement of friendly ground forces.”

According to a 2014 US Defense Publication, “all Boeing 707 family E-8 Joint STARS aircraft were assigned to the Georgia Air National Guard’s 116th Air Control Wing at Robins Air Force Base, GA, and a “total-force blended wing” with active-duty Air Force, Army and Air National Guard personnel.” The US Air Force has shifted its budget and has not acted on the modern upgrades for the JSTARS. For example, “Raytheon has already created the ASTOR Sentinel R1 for Britain, using Bombardier’s Challenger 604. Brazil uses Embraer’s P-99B, based on their ERJ-145. Lockheed Martin’s Dragon Star/ Net Dragon MULTI-INT rental uses a Gulfstream III, and they’ve been working with Italy in Afghanistan. Boeing offers their P-8 as a base, and they’re also supplementing it with a smaller Bombardier Challenger 604 MSA offering, which borrows the P-8’s core mission systems. The P-8A’s mission system will soon be programmed to include overland radar surveillance, so the MSA’s only barrier will involve mounting an appropriate radar. If the USAF can’t find any recapitalization money because of budget-swallowing programs like the F-35 fighter, their options will shrink. The Northrop Grumman Global Hawk UAV family’s continued momentum in the face of USAF opposition could leave the USAF dependent on USAF RQ-4B surveillance and EQ-4 BACN communications fleets to perform lesser slices of the E-8C’s roles, with the hope that improvements over time would allow flying over a wider range of conditions, and broaden each UAV’s capabilities. NATO’s pooled RQ-4B Block 40 AGS fleet would also be available for a set number of hours each year.

The US Navy could also take over a chunk of this role. USN P-3Cs have already been used for overland surveillance in CENTCOM, and their 737-based P-8A Poseidon replacements will gain an extremely capable surface-looking AAS radar by 2019 or so (P-8A Increment 3). Poseidon’s MQ-4C Triton UAV companion is a Global Hawk derivative with its own surveillance capabilities, including an advanced surface-scanning AN/ZPY-3 AESA radar that’s currently optimized for maritime surveillance.”

It is clear that the US Air Force does not have an adequate battle 2015 C4ISR air platform. Perhaps, the U.S. Congress and the war hero John McCain can provides funds to give the U.S. warfighters a fighting chance and upgrade the JSTARS platform.