GMCStream Flash News Blue Origin On Going Space Programs-Amazon CEO and Media showman Jeff Bezos has unveiled an unmanned Moon lander and a new rocket engine developed by his Blue Origin space program with an eye toward getting in on the ground floor of space colonization. The two-story unmanned 'Blue Moon' lander can carry up to four smaller rovers and several satellites, Bezos said, showing off a mockup of the module at a media event in Washington. He hopes to make Blue Moon NASA's go-to for delivering payloads to the Moon's surface, part of a concerted effort to involve his company in constructing the basic infrastructure on which the Moon colonies of the future will depend. "We are going to build a road to space," Bezos told the audience. "And then amazing things will happen." 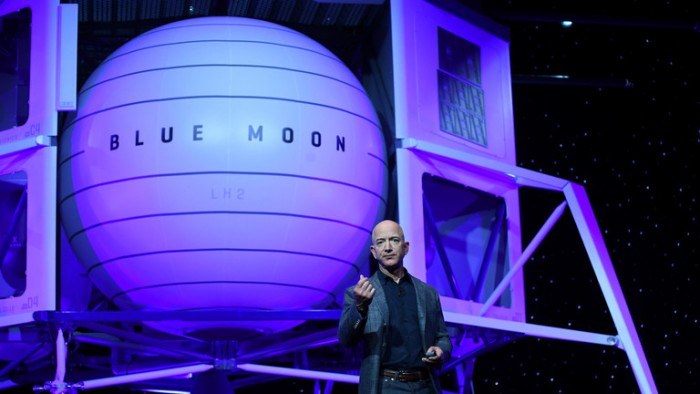 It is clear that Bezo’s “New idea” is generated by numerous Hollywood Space Science Fiction movies. The Bezo’s Washington Post shared some of his big ideas about the future of space, describing rotating "habitats" equipped with artificial gravity and plant life and hosting over a million people, and blamed the high cost of celestial experimentation for the fact that despite centuries of dreaming, humanity remains earthbound. "My generation's job is to build the infrastructure," Bezos said, suggesting Blue Origin could drive down the costs of space exploration just like Amazon drove down the costs of online retail. Describing the myriad problems facing Earth, he envisioned a future in which Blue Origin would rescue humanity from a polluted, overpopulated and energy-starved planet. While humanity waits to be uplifted, Blue Origin's New Shepard rocket will take tourists on short space-tourism journeys – at $300,000 per ride – starting later this year. Its New Glenn rocket is being developed for satellite launches and is expected to debut in 2021, and the new rocket engine Bezos unveiled, the BE-7, is capable of 4,535kg of thrust.

Blue Origin is no stranger to collaborations with NASA – the company received $13 million last year to develop technology for the lander as part of a 'Space Act Agreement' – but Bezos wants the government to work with Blue Origin to build the infrastructure future space colonies will rely upon. With Vice President Mike Pence now determined to build a space platform in lunar orbit and put American astronauts on the south pole of the Moon by 2024, Bezos made a direct appeal to the administration to accept his help in meeting that deadline. To help the deal along, his Washington Post published an article on Thursday focusing on NASA's missed deadlines and blown budgets in its own attempts to return to the Moon that presented Blue Origin as the obvious answer to the government's fiscal space woes. It's unclear what will happen if any other countries attempt to get their hands on some of that sweet Moon real estate, since the Outer Space Treaty prevents anyone from owning a piece of the Moon or any other planet outside Earth, but one thing is clear – the Blue Moon lander will be perfect for delivering their Amazon Prime orders.

This email address is being protected from spambots. You need JavaScript enabled to view it. URL: https://www.GMCstream.com