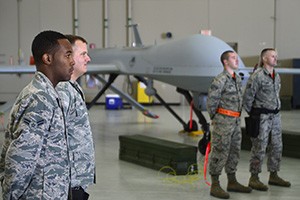 General Mark A. Welsh III tiptoed over the reduction in US Air Force manning as non-military backgrounder Deborah Lee James was appointed Secretary of the Air Force on December 20, 2013. With the General set to retire in June 2017, it is clear that when agendas are set to introduce the policies of the Administration’s politically correct progressivism, best to keep your head down and click your heels. General Welsh, an admired Chief of Staff, spoke recently, “the variety of threats is exploding on us, and the cost of everything is significantly.” Meanwhile, “the size of the USAF is down.”  Since 1991, the Congressional political ax has come down to remove over 200,000 airmen from active duty. After the blood bath, only 60% of the required forces were left.  Yet in Intelligence, Surveillance, and Reconnaissance (ISR) an enterprise of 35,000 airmen since 2006 limped along. From that point, over 50,000 were eliminated and thrown back into the civilian employment sectors, which led to extreme hardships for many. Welsh went on “we’re at 82-85% manning levels in virtually every mission area, and there seems to be no higher level in the future.” Moral and overall air force capability is irreversible as seen in the use of State Air National Guard units being ferried every six months with low levels of air capability to global trouble spots. AFSCs from 1A8X1F to 8R000 are in airmen want ads, but no one is rushing in to enlist or re-enlist based on the professional politicians that have a great distain for military professions. The airmen want-ad list for the 2016 service program is quite large. Many of the jobs that were drawn down are now in demand as seen with WikiLeaks’ on-line memos. According to Brig. General Brian Kelly, director of military force management policy, “The Air Force is exhausting all possibilities in looking for ways and opportunities to grow back and prioritizing those.” 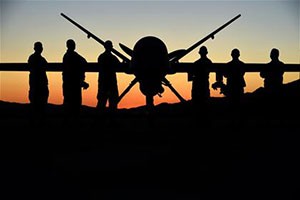 The US Air Force is panicking and looking for re-enlistments in over 70 career fields and will provide over $220 million in re-enlistment bonuses. Air Force platforms have become complex and those who maintain the F-15s, F-16s, F-22s, F-35s, and others such as the CV-22 Osprey are in very short supply. Kelly stated that he plans to bring in over 28,000 new airmen in 2016 to be maintainers. The goal is to have a force of 317,000 in fiscal 2016, which contradicts General Welsh III statements that “the human resources for the Air Force are down”. Recently, the White House Commander reversed again the pullout from Afghanistan by the end of his term. Today, the 9,800 American military force will stay in place. Of course, the large numbers of remote piloted aircraft (UAV) will need to be maintained and piloted out of Creech AFB in Nevada.

Creech AFB is no longer a top-secret location.  The Creech AFB Main Gate is on U.S. Highway 95, at the north end of the small town of Indian Springs, Nevada. Creech is home to the Predator unmanned aerial vehicle, and is one of two emergency divert airfields for the 15,000-square-mile Nevada Test and Training Range Complex. The base is located about 45 miles northwest of Nellis AFB. On March 13, 2007, the arrival of the first MQ-9 Reaper at Creech marked another milestone in the base's growing fleet of remotely piloted aircraft. The U.S. Air Force provided for direct leadership of these missions on May 1, 2007, with the activation of the 432d Wing at Creech. Activation of the 432d Air Expeditionary Wing at Creech on May 15, 2008 formally recognized the full spectrum of these operations.

General Welsh mentioned of a “capability gap” that is closing between the US and its adversaries (i.e. Russia, China, and North Korea. Iran is no longer considered an enemy). “Airpower will no longer be an asymmetric advantage for the US military. The impact of that will be catastrophic. One of the real truisms of modern warfare is.