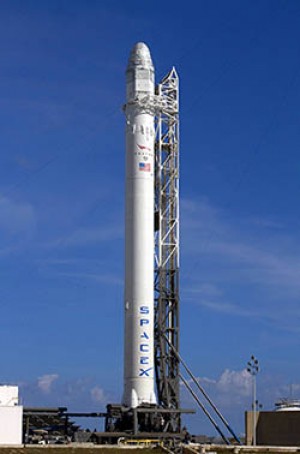 On May 26, under an updated agreement that streamlines the certification process, the U.S. Air Force certified SpaceX to compete for government space launches. The first proposal that SpaceX can provide a competitive bid is June 2015 for GPS III launch services.  SpaceX, with its Falcon 9 launch vehicle, can now compete for national security space launches against United Launch Alliance, the Boeing-Lockheed Martin team that currently have demonstrated a solid operational record on Air Force spy satellite launches.

The new agreement of Air Force Space Command, allows the commander of the Air Force Space and Missile Systems Center to certify SpaceX as long as the company can demonstrate its ability to design, produce, qualify and deliver the launch system. SpaceX must be able to provide future mission assurance support required to deliver national security payloads to specific orbits on schedule. "I am very pleased with all we have accomplished," SMC Commander Lt. General Sam Greaves said in a news release. "The updated [agreement] captures important lessons learned along the way about the process and allows the flexibility to certify SpaceX…, while maintaining our 'laser focus on mission success.'

“This is a very important milestone for the Air Force and the Department of Defense,” said Secretary of the U.S. Air Force Deborah Lee James. “SpaceX’s emergence as a viable commercial launch provider provides the opportunity to compete launch services for the first time in almost a decade. Ultimately, leveraging of the commercial space market drives down cost to the American taxpayer and improves our military’s resiliency.” The company, initially funded by the U.S. Government and founded by PayPal founder Elon Musk, has already carried multiple payloads for NASA.  SpaceX President Gwynne Shotwell said

"We look forward…to competing for EELV [evolved expendable launch vehicle] missions.” As the former Marketing Vice President of SpaceX, Shotwell praised the “Silicon Valley startup culture as a culture gap between SpaceX and the Pentagon. SpaceX’s only connection to Silicon Valley was the Venture Start-up firm that funded Elon Musk’s venture such as, Pay-Pay, Solar City, Tesla, and SpaceX. The company began its early operations and manufacturing operations in a Los Angeles California warehouse. Los Angeles is located over 381 miles south of Silicon Valley.

ULA's reliance on a Russian-made rocket engine used for its NSA National Security Agency mission vehicles and for the U.S. Space Shuttle Missions, have demonstrated lower cost and proven performance overtime, which would normally trump the political agendas of Washington DC lobbyists.