USAF prepares for July 2015 Launch of WGS on Delta IV 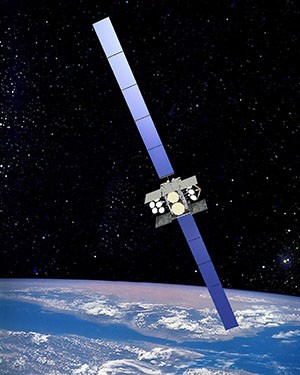 The U.S. Air Force Space and Missile Systems Center's seventh Wideband Global satellite communication is being prepared for a July 22 launch at Florida’s Kennedy Space Center. WGS-7 will complete its final procedures and then transportedto the launch pad at Cape Canaveral US Air Force Station. The WGS is a MILCOM Satellite that provides for the warfighter’s broadcast, multicast, and point to point connections.   WGS can support simultaneous X- and Ka- band communications, with cross-banding that makes it transparent to the military/government users to communicate across terminal types. Real-time data is routed through X-band, Ka-band, and switchable X - Ka-band terminals that supports comm-on-the-move.  “Built by Boeing, WGS-7 is the first satellite under a new contract approach contributing to a cost savings of more than $100 million. With three more satellites in production, the WGS constellation is expected to have a total of ten satellites on orbit by 2018.”

The satellite will be aboard an EELV medium Delta IV. All of the Delta IV integration work and preflight processing takes place inside United Launch Alliance ULA’s Horizontal Integration Facility (HIF), at Cape Canaveral Air Force Station in Florida. 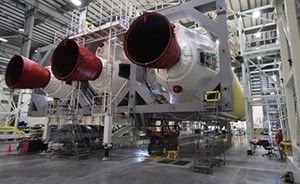 Each core booster elements of a Delta IV Heavy measures 134 feet in length and 17 feet in diameter. They are equipped with an RS-68 engine powered by liquid hydrogen and liquid oxygen propellants producing 656,000 pounds of thrust. Together they generate 1.96 million pounds of thrust.The RS-68 is manufactured by Aerojet Rocketdyne and commercially developed for the United Launch Alliance Delta IV family of rockets.

With US Congressional sanctions levied on the Russian Federation, the 2015 National Defense Authorization Act calls for the Russian-built RD-180 to be replaced by an American-made alternative for national security space launches by 2019.  In May 2015, Aerojet Rocketdyne, a GenCorp (NYSE:GY) company, completed a successful series of hot-fire tests of key additively manufactured components for its AR1 booster engine replacement at its Sacramento California Testing range. This is just a very small testing step for the AR1.  In the meantime, the RD-180 engine will be powering the first stage of Lockheed Martin's Atlas III, Atlas V rockets, and Russia’s Angara rockets. The Russian developed RD-180 is marketed jointly by NPO Energomash and Pratt & Whitney. United Launch has partnered with Blue Origin, a space start-up, for the BE-3&4 Engines.