The vast territory of space is similar to the vast free lands west of the Mississippi River, which was the drainage river of the North American Continent.  The drive to expand the knowledge and the wealth of the United States was called “Manifest Destiny.” It met conquering the unknown beyond west of the Mississippi.

Jonathan Lunine, director of the Cornell Center for Astrophysics and Planetary Science wrote that planet moons that might have extraterrestrial life are Enceladus, Titan, and Trident. Many other “exoplanets” will be explored not with robotic probes but the use of the James Webb Space Telescope and WFirst, the planned Wide Field Infrared Survey Telescope.

Maj. Gen. Charles Frank Bolden, Jr., (USMC-Ret.) was nominated by President Barack Obama and confirmed by the U.S. Senate as the 12th Administrator of the National Aeronautics and Space Administration. He began his duties as head of the agency on July 17, 2009. In 2016 State of NASA 2, Bolden write, “Because NASA’s study of the cosmos and robotic exploration of the solar system is unlocking the mysteries of places like Pluto, the Kuiper Belt, Jupiter, Europa, the Sun, Saturn, her moons and Mars…”

Unfortunately, in the last eight years, US Congress has only allocated a paltry $19 billion/year in America’s space program. Instead of expanding on its great space technology achievements, NASA is using its existing satellites and those of the Europeans to prove a political and economic growth agenda that Global Warming (aka Global Climate Change) truly exists. If it can be proven by satellite observations then the survival of the entire planet is at risk and perhaps we should all be moving to colonize habitable planets. Manifest Destiny cannot happen if we do not have great leaders who are willing to take great risk and rewards in making the United States a preeminent space-faring nation.

Instrumentation is Not Space Travel

Terra is the flagship of NASA’s Earth Observing System. The satellite’s five instruments concurrently observe Earth’s atmosphere, ocean, land, snow and ice, providing insights into Earth systems such as the water, carbon and energy cycles. The MODIS and ASTER instruments onboard also provide critical information for assessing and managing natural disasters and other emergencies. Instruments: ASTER * CERES * MISR * MODIS * MOPITT In December 2015, “NASA has awarded a sole source letter contract to Ball Aerospace & Technologies Corporation, Boulder, Colo., to build the Operational Land Imager-2 instrument for the Landsat 9 project. Ball… will build a second Operational Land Imager (OLI) for the Landsat 9 project (Landsat 7 & 8 did not prove the theory that global warming even existed). The OLI is a reflective, multi-channel, earth-imaging instrument that provides highly calibrated imagery to detect and quantify the affect natural and human-induced activities on the Earth’s surface. The OLI has eight detection bands ranging in wavelengths from 433 nm to 2300 nm with spatial resolutions of 30 meters and one panchromatic band with a spatial resolution of 15 meters. The OLI satisfies stringent image quality performance standards for radiometric, spectral, spatial, uniformity, and calibration that are critical for producing data that meets the users’ needs in analyzing deforestation, agricultural yield estimates, spread of pest infestations, urbanization, water resources, and many other operational and research applications. 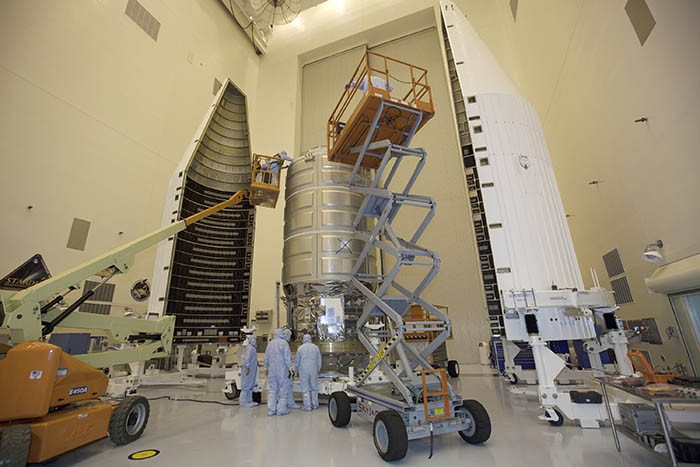 Bolden further stated in the State of NASA, “At the Kennedy Space Center, our teams will outfit Orion’s crew module with the spacecraft’s heat-shielding thermal protection systems, avionics and subsystems like electrical power storage, cabin pressure control and flight software – to name just a few. Direct field acoustic testing will be completed in Colorado. Structural integrity tests will be performed at the Glenn Research Center in Cleveland.”

To ensure research aboard the International Space Station continues uninterrupted, NASA at the Kennedy Space Center is preparing to launch a Cygnus spacecraft to provide needed supplies to the orbiting outpost. According to NASA, “A new 3D printer and research projects examining everything from adhesive technologies to the behavior of large fires in space are packed inside an Orbital ATK Cygnus spacecraft (Orbital CRS-8) Resupply Mission for launch Tuesday, March 22, at 11:05 p.m. EDT from Cape Canaveral Air Force Station in Florida. The launch window extends for 30 minutes. Launching atop a United Launch Alliance Atlas V rocket, the Cygnus, which carries no crew, will steer itself to the station during the course of three days. (The USAF and DoD awarded $161.9 MIL to replace the dependable (Delta IV & Atlas V) Russian RD-180. UL and Aerojet Rocketdyne were awarded the first of many awards. Also, Amazon's Jeff Bezo is in great haste to complete the BE-4 rocket engine with help from Boeing.) Astronauts and ground controllers will use the station's robotic arm to grapple Cygnus and connect it to the Earth-facing port of the Harmony module. Cygnus will stay connected to the Earth-facing laboratory for about two months before being released to burn up in Earth's atmosphere.

Much of the science will be conducted by astronauts aboard the International Space Station as they continue landmark research above Earth for the benefit of those on the Earth and future astronauts making the journey to Mars (2030). Other science, such as the fire research and reentry data collection, will be conducted at the end of the mission and only after Cygnus drops off its materials and is flying on its own far from the station.

Cygnus is carrying more than two dozen nanosatellites that will be ejected from either the spacecraft or the station at various times during the mission to evaluate a range of technology and science including Earth observations. The station residents depend on cargo missions from Earth to supply them with daily clothes, food, water and air, along with the equipment they need to work in orbit. For instance, this mission is carrying a spacesuit for the crew and high-pressure cylinders to recharge the station's air supply.

Eugene Cernan said it so well, “After Apollo 17, America stopped looking towards the next horizon. The United States had become a space-faring nation, but threw it away. We have sacrificed space exploration for space exploitation, which is interesting but scarcely visionary.”