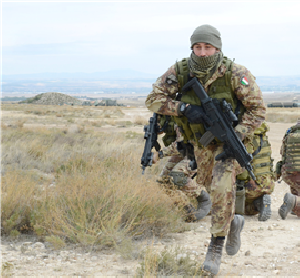 Exercise Trident Juncture 2015 involved 36,000 personnel from more than 30 nations. Five thousand troops from the US Air Force, Army, Navy, and Marines participated in the exercise. The exercise took place mainly in Spain, Portugal and Italy, but will included portions on the Atlantic Ocean and Mediterranean Sea, as well as in Norway, Germany, the Netherlands, Belgium and Canada. It was the largest NATO exercise in the last 13 years. .

As reported by the Air Force Times, “Exercises such as these help ensure the agility and readiness to execute real-world missions with other nations at a moment's notice and as a complex and dynamic global environment may dictate,” said Lt. Col. Christopher Karns, Air Force spokesman. “Trident Juncture 15 provides an opportunity to work with Allies and partners while enhancing collective capabilities. At the same time, it signals a strong and collective commitment to ensuring regional stability.”

“Exercises like this one … are vital for our continued security,” said U.S. Ambassador and NATO Deputy Secretary-General Alexander Vershbow at Trident Juncture’s opening ceremonies. “Within a rapidly changing security environment, with new challenges appearing almost daily, ensuring the readiness and the operational capability of our forces is more important than it has ever been.” The exercise will allow NATO allies to prepare for rapid deployment to address any crisis in or near Europe, Vershbow said.

Trident Juncture 2015 will included traditional exercises, like joint war-fighting and ballistic missile defense, but it’s also focused on countering newer threats from terrorist groups like ISIS. NATO hopes to defend against cyber-attacks, countering propaganda from state-owned media and combating hybrid warfare that includes outside states supporting militant groups in another nation, according to NATO’s press agency. Three million Syrian refugees are expected to migrate to Germany and NATO will work with the nations in the EU to establish a plan to handle this humanitarian crisis caused by the Syrian, Libyan, Iraq, and Afghanistan wars.

According to NATO, “Rising political instability, ethnic tension, and persisting socioeconomic challenges are climaxed by a blatant invasion of one state’s territory by another.”

“Exercise Trident Juncture will demonstrate that NATO is ready and able to defend any ally against any threat in any form,” Vershbow said. “It will demonstrate our ability to move quickly and decisively beyond our borders to protect our partners and our interests.  And that we can deal with everything from conventional military engagements to more subtle hybrid warfare techniques and propaganda.”