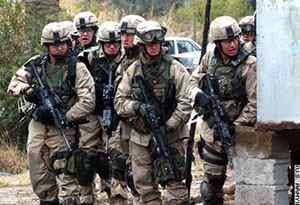 On December 15, 2011, all U.S. troops left Iraq. In 2015, the U.S. Pentagon will open a new base in Iraq’s Anbar Province, an Islamic State stronghold, with 450 American troops from the 82nd Airborne and Special Operations. Currently, the U.S. has a typical U.S. Army brigade in Iraq or 3,550 — the size of a typical Army brigade.

According to the New York Times, “The model would be the new base already being built at Al Taqqadum, an Iraqi post near the town of Habbaniya in eastern Anbar. The American troops being sent there are to set up the hub primarily to advise and assist Iraqi forces and to engage and reach out to Sunni tribes in Anbar, officials said. One focus for the Americans will be to try to accelerate the integration of Sunni fighters into the Iraqi Army, which is dominated by Shiites.

Gen. Martin E. Dempsey, the chairman of the Joint Chiefs of Staff was quoted that town of Ramadi Iraq was now in ISIS control and an attempt will be made to retake the strategic town.

The 82nd Airborne Division was deployed to Iraq many times before; namely, “In February of 2003, the 2nd Brigade Combat Team (BCT), deployed along with the Division Headquarters to Kuwait in support of Operation Iraqi Freedom. The Division conducted sustained combat operations throughout Iraq and the CENTCOM area of operations... The 2nd BCT remained in Iraq attached to the 1st Armored Division and continued to conduct combat operations. The Division Headquarters along with the 3rd BCT and elements of the DIVARTY, DISCOM, Aviation, and separate battalions returned to Iraq in August of 2003 to continue command and control over combat operations in and around Baghdad. In January 2004 the 1st BCT deployed to conduct combat operations in OIF…The 3rd Brigade Combat Team (3BCT), the 82nd Sustainment Brigade, 1-17th Cavalry Regiment, 1st Battalion, 82nd Combat Aviation Brigade and 1-325 deployed in support of operation Iraqi Freedom in July and August  2006. In January 2007 the 82nd’s 2nd Brigade Combat Team was called upon to deploy in support of the “surge” into Baghdad, Iraq…in May 2011, 2BCT was deployed to Iraq in support of Operation New Dawn. It was the last brigade combat team to pull out of Iraq and successfully relinquished responsibility of the Anbar Province to the Iraqi government…” 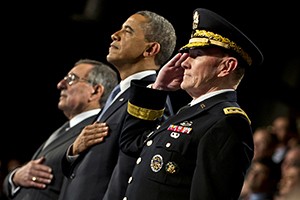 General Dempsey indicated that the Ramadi effort would take months. He felt that retaking Mosul, which is only 69 miles from Baghdad, would also be priority. “Timetables are fragile,” Dempsey said. “They are dependent on so many different factors.” Richard D. Welch, a retired Special Forces colonel who spent more than six years in Iraq said, “The closer the U.S. military is to the action on the ground, the better the chances of influencing positive outcomes, especially in building trusted relationships with the Sunni again.”

The White House belief that American troops would not be in any combat roles is idiotic. Numerous critics of this new White House decision have stated that these deployments of American troops to Iraq only highlights again the failed strategies of the Commander in Chief of U.S. Armed Forces.