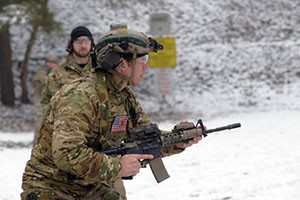 to mobilize within US Cities.

U.S. Department of Defense has spent millions of budget dollars on the classified “Operation Jade Helm 15.”  The speculation from civil liberty groups is that the Operation known as Jade Helm is designed to nullify the second amendment rights of gun-owners across the U.S. Also, several groups have speculated that the Jade Helm will demonstrate to Russia that the US Military has a large mobilized force Army Green Berets, Air Force Special Ops, and Navy SEALs action forces to repel any paratroop landings. The U.S. Army Special Operations Command Operation will begin onJuly 15 through September 15, 2015 in a multi-state exercise called Jade Helm 15. All towns in the American Southwest will experience military operations within and without of their city limits on private and public lands. According to Fox News, “GOP 2016 presidential candidate Senator Ted Cruz, R-Texas, reportedly “reached out to the Pentagon” about Operation Jade Helm. On May 7, 2015, new Secretary of Defense Ash Carter, spoke “…We're very open and up front about our training activities in the United States, and I should say that we're very grateful for the support of communities around the United States in all of our training facilities. We count upon people's -- the support of Americans in our training areas and around our training areas and around our bases, and are very grateful for the hospitality that we receive. Carter was quite reluctant to discuss the purpose of this extensive Military exercises in the Continental U.S. or who had tactical control over these units. Further, in time of war, would these forces be quartered in private citizen’s homes in California, Texas, or Arizona? Ten U.S. States will see massive troop movements. The training States that will be affected by this massive military operation will be Florida, Mississippi, Louisiana, Nevada, California, Texas, Arizona, New Mexico, Utah and Colorado. Lt. Gen. Charles T. Cleveland commander of U.S. Army Special Operations Command, or USASOC spoke on January 27, 2015, "Up until about three years ago, we assumed away the problem with a resurgent Russia. The narrative ... as a force provider for Army Special Operations capability had been clouded by direct, indirect forces, kinetic, non-kinetic forces, black-white forces, and even theater and national forces…Enemies of the United States are operating just "left" of where there would be a response from the Joint Task Force, or JTF, otherwise they would incur the wrath of what is a very lethal JTF."

According to the US Army, “Special Forces Green Berets deploy and execute nine doctrinal missions: unconventional warfare, foreign internal defense, direct action, counter-insurgency, special reconnaissance, counter terrorism, information operations, counter proliferation of WMD, and security force assistance. There are five active component Special Forces Groups and two U.S. Army National Guard Groups. Each SFG is regionally oriented to support one of the war-fighting geographic combatant commanders. The cornerstone of the SF Group’s capability is the Operational Detachment-Alpha, a highly trained team of 12 Special Forces Green Berets. Cross-trained in weapons, communications, intelligence, medicine, and engineering, the ODA member also possesses specialized language and cultural training. The ODA is capable of conducting the full spectrum of special operations, from building indigenous security forces to identifying and targeting threats to U.S. national interests. The U.S. military’s premier unconventional warriors, the Special Forces Green Berets provide a viable military option for operational requirements that may be inappropriate or infeasible for large conventional forces. In the last decade, Green Berets have deployed into 135 of the 195 recognized countries in the world. Successes in Afghanistan, Iraq, Trans-Sahel Africa, the Philippines, the Andean Ridge, the Caribbean, and Central America have resulted in an increasing demand for SF around the globe.