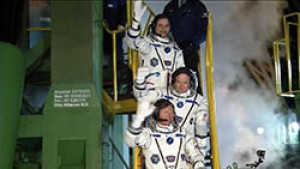 NASA announced that “Expedition 43 Soyuz Commander Gennady Padalka and Flight Engineer Mikhail Kornienko of the Russian Federal Space Agency (Roscosmos) and NASA Flight Engineer Scott Kelly launched on the Russian Soyuz TMA-16M spacecraft on March 28, Kazakh time from the Baikonur Cosmodrome in Kazakhstan to begin a six-hour journey to the International Space Station. For Kelly and Kornienko, the launch began a one-year mission on the station to conduct extensive research on the effect of long duration space travel on the human body.”

“… Expedition 43 Soyuz Commander Gennady Padalka and Flight Engineer Mikhail Kornienko of the Russian Federal Space Agency (Roscosmos) and NASA Flight Engineer Scott Kelly arrived at the International Space Station on March 27 U.S. time (March 28 Kazakh time) following a four-orbit, six-hour rendezvous. A few hours after docking, Padalka, Kelly and Kornienko opened hatches and were greeted by station Commander Terry Virts of NASA and Flight Engineers Anton Shkaplerov of Roscosmos and Samantha Cristoforetti of the ESA. For Kelly and Kornienko, their entrance into the station began a year on the orbital laboratory where they will conduct extensive research on the effect of long duration space travel on the human body. Data from Kelly and Kornienko’s 342-day expedition will be used to determine whether there are ways to further reduce the risks on future long-duration missions necessary for deep space missions.

In tandem with the one-year mission, Kelly’s identical twin brother, former NASA astronaut Mark Kelly, will participate in a number of comparative genetic studies, including the collection of blood samples as well as psychological and physical tests. This research will compare data from the genetically identical Kelly brothers to identify any subtle changes caused by spaceflight. The tests will track any degeneration or evolution that occurs in the human body from extended exposure to a microgravity environment. These new twin studies are a multi-faceted national cooperation between universities, corporations and government laboratory expertise.”