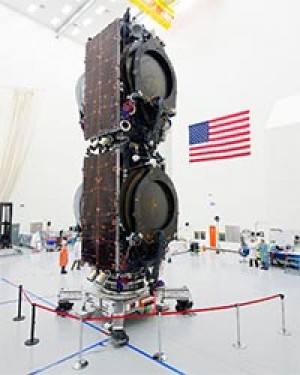 Space Exploration Technologies Corporation is an American space transport Services Company headquartered in Hawthorne, California, USA.  SpaceX launched the DSCOVR (Deep Space Climate Observatory) satellite aboard a reusable Falcon 9 late evening on February 11, 2015.  DSCOVR will travel for a spot almost a million miles away known as "Lagrange point 1”, or "L1.”  L1 is a stable place between the gravities of Earth and the Sun that is outside of our earth's magnetic environment.  DSCOVR will observe Earth for 110 days surveying solar winds, which are capable of disrupting aviation frequencies, electrical power grids, and GPS.

The SpaceX’s reusable rocket performed a "soft landing”, splashed down in high ocean waves and was not recoverable.  This the second failed attempt of SpaceX’s efforts to demonstrate a cost benefit in a reusable launch rocket.  SpaceX’s first attempt to land the Falcon 9 on the 300-by-100-foot barge back in January 2015 was a failure when the rocket exploded on impact.  SpaceX's next scheduled Falcon 9 launch is set February 27, when it will deliver two satellites to space for French-based Eutelsat.  Boeing has successfully mated two 702SP (small platform) satellites in a stacked configuration in preparation for the first-ever conjoined satellite launch.  The milestone is a significant step towards the February 2015 launch of the satellites ABS-3A and Eutelsat 115 West B, the first-ever all-electric propulsion satellites scheduled to enter service.

The 702SP, designed by Boeing Network & Space Systems satellite businesses and Phantom Works, features an all-electric propulsion system and a joint configuration for a dual-manifest launch.  By eliminating chemical propulsion and using only electric propulsion, the 702SP platform offers a significant mass advantage that translates to increased revenue-generating payload performance and launch vehicle savings to customers.  The Falcon 9 is more efficient at getting mass into LEO than Delta IV and Atlas V and solar electric is more efficient than Delta IV and Atlas V LH2 stages in GSO.  These spacecraft designed stackable.  EUTELSAT 115 West B is a next generation satellite.  It will be positioned at 114.9° W and will provide the Americas with new capacity, to attend strategic markets serving high-growth applications in video, data, mobility, and government.  EUTELSAT 115 West B will offer unique coverage over the Galapagos and Easter Islands.  ABS-3A will allow the extension of C- and Ku-band services into the Atlantic Ocean.