John McLucas wrote in “Space Commerce-Frontiers in Space” that Space Commerce relates the story of private enterprise's unsteady rise to prominence as a major influence on world space policy and research.

The first space race proved the technological and military prowess of the two superpowers (Russia and America); but since the 1970s that contest has been supplanted by a multinational struggle to command the commercial opportunities of space.  The commercial space age was born in 1965 when Early Bird, the first commercial communications satellite, went into orbit.”  Current research studies have concluded that global markets are increasingly vital for the aerospace industry, in terms of access to markets, capital, labor, and technology.  Globalization has also changed the way companies do business and conceive of market opportunities.  Companies are increasingly willing to look at unusual alliances and take on risks that would previously have been deemed unacceptable.

With innovation dead in Silicon Valley California, Venture Capitalist are desperate to continue business models of early innovation cycles with 2000% IPO rates of returns. One wonders if they are just at the end of creating SpaceX, Tesla, and Solar City which were launched by politically lobby for huge US Government initial tax free millions in funding. The “cube-sat “innovations that was heralded as a Stanford University “engineering marvel” were just a military concept of many satellites being launched from one war head top of a ballistic missile. The market for achieving high returns for Silicon Valley VCs appeared to be vast.  Northern Sky’s Research (NSR)'s reported that the global satellite industry should launch satellites worth collectively over $250 billion USD well into 2027.  NSR expected over 1,600 satellites to be launched by 2025.

Planet Labs sprung from Stanford University’s a belief that this is the spring board for new innovation to image the global warming phenomena. You could control who is violating the EPA regulations. Simply if you could string a bunch of these cube satellites (150) into an array and you have the most amazing telescope in space, the size of a planet's diameter, or bigger, and always up to date. The VC hype is that these cube satellites would be amazing. So these NASA engineers that arrived on H1s but in their hearts they wanted to start a satellite related technology in a “Palo Alto” garage. Then to remain in the USA they had to find a start-up in 2010 and use their engineering training at the Mountain View NASA/LM.

UK Founder Will Marshall was an H1 systems engineer on lunar orbiter mission “LADEE”, a member of the science team for the lunar impactor mission “LCROSS”, served as Co-Principal Investigator on PhoneSat, and was the technical lead on research projects in space debris remediation. Will received his Ph.D. in Physics from the University of Oxford and his Masters in Physics with Space Science and Technology from the University of Leicester.  “Planet Labs was founded in 2010 as Cosmogia by former NASA “scientists” Chris Boshuizen, Will Marshall, and Robbie Schingler. In 2014, Twenty-eight Planet Labs satellites were launched from the ISS via the NanoRacks CubeSat Deployer. In January 2015, the firm raised $95 million in funding. As of May 2015, Planet Labs and VC Draper Fisher Jurvetson (DFJ)raised a total amount of $183 million in venture capital financing and 300 employees. DFJ was the primary VC for Elon Musk’s space/car/solar panel start-ups (funded by USG) and had strong liberal political connections with the White House, US Department of Energy Secretary, and NASA’s director.

As it is the typical strategy of SV VCs, leveraging one successful space start-up funded with millions of US taxpayer funds with another piece of the integrated space business model is a winning approach. In July 2015, Planet Labs acquired BlackBridge and its RapidEye constellation.” 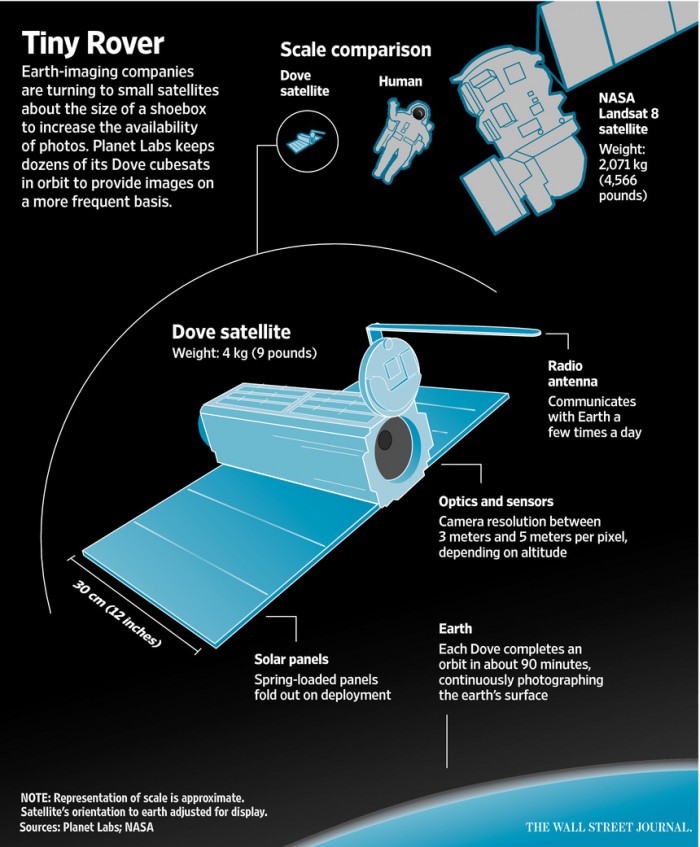 According to reports in Space News, “Flock-1 Planet Labs satellites are CubeSats that weigh 4 kg (1000 times lower than legacy commercial imaging satellites), 10x10x30 cm in length, width and height, orbit at a height of about 400 kilometers (250 mi) and provide imagery with a resolution of 3–5 m (9.8–16.4 ft.) and envisaged environmental, humanitarian, and business applications. The twenty Flock 2e' 3U CubeSats [were launched on March 23, 2016 on the Cygnus CRS OA-6 cargo mission. Twelve Flock-2p Dove satellites each of which weighs just 4.7 kg were launched by ISRO (Indian Space Research Organization) on 22nd June 2016. The PSLV-C34 that carried the 12 Dove satellites lifted off from India's spaceport Sriharikota at 9:25 IST.”

It is clear that Planet Labs Cube-Sats have clear dual use as an inexpensive satellite tied to the SpaceX launcher that can be used for monitoring the PRC and Russia. Even if these satellites are destroyed by missiles or other satellites, the large numbers ensure continuous command and control. (ISR). This is not the only time that commercial aerospace launches were disguised military applications. Steve Jurvetson, partner at Draper Fisher Jurvetson and a Planet Labs board member, congratulated the company… “Planet Labs is on its way to becoming the next great commercial space company.” Since it is so easy to duplicate the Planet Labs business model by any nation in the world, it remains skeptical that DFJ’s venture capital risk will last in the long run and if Marshall and his associates would benefit from an IPO.