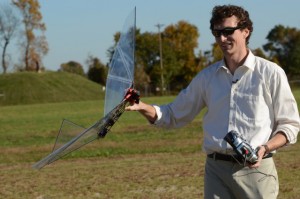 US Army ROBO-RAVEN drones set to fly for Warfighters.

On November 6, 2015, the US Federal Aviation Administration FAA demanded registration for recreational drones weighing more than 250 grams, or roughly nine ounces, according to two task-force members and a third person close to the Task Force group. That would include almost all consumer devices other than toys. The growing drone industry wanted the drones to weigh more than 250 grams, but the drone Task Force found that the high weight could injure people.

On November 6, 2015, the US Army ABERDEEN PROVING GROUND, Maryland revealed that in the future, it is possible that some unmanned aerial vehicles, or UAVs, might sport wings that flap like a bird or a butterfly. The Army Research Lab, or ARL, is testing that concept at the Spesutie Island Robotics Research Facility on Chesapeake Bay.  John W. Gerdes III, mechanical engineer at the Vehicle Technology Directorate, has been testing such a UAV, known as Robo-Raven. He designed the vehicle in collaboration with the University of Maryland.

Could a flappy winged bird make sense for the warfighter?  Gerdes said, "Ultimately, what we're trying to go after is a vehicle which, at least in part, duplicates some of the great things animals can do…The benefit of the flapping air vehicle is obvious when you look at nature. Flying creatures are so good at what they do because of how well in harmony all their subsystems work…Everything is perfectly matched to itself so they are able to perform at the highest possible level, given their size and weight. We're curious to discover the tricks they're using. The challenge is to engineer a system, which can duplicate that behavior. “

“We know that animals that fly are able to do so because of an enormous number of muscles and nerves that control their flexible wing and body. The slightest alteration of a wing can send a bird soaring hundreds of feet into the air on an updraft. It is extraordinarily difficult to unravel all of the pieces of that problem, where there are flexible wings, sensors and controls distributed everywhere, it is just too difficult to engineer at this point. But, we can approach that solution at least."Gerdes said.  “For one thing, it has two motors that independently control each wing. There are commercial flappy-bird designs that work more efficiently using just one motor to control both wings…But from a scientific standpoint, this approach lets one learn a lot more about the platform and explore interesting spaces of the design, which wouldn't be possible with a traditional flapping wing single-motor design...With a single motor, one can only speed the wings up and slow them down, which doesn't do much to inform learning of the system.” Gerdes said

So, the goal is not to build the best flapping wing possible. Robo-Raven's wings were designed with the help of ARL's 3-D printer. The Robo-Raven was programmed with a commercial-off-the-shelf Arduino micro-controller, which controls the flapping motion.  A hobby shop transmitter and receiver is used to send and receive commands to Robo-Raven. It can fly for 10 to 15 minutes before the motors overheat.

The various Army labs are working on this drone.  Ultimately in the future, soldiers can have a single platform that's safer, quieter, stealthier, and more versatile, that can do a wide range of missions. "It's an exciting project, full of possibilities…” Gerdes said. The hope is that the U.S. Army Armament Research, Development and Engineering Center will focus on the Robo-Raven concept that can lead to an operational platform for the warfighter. 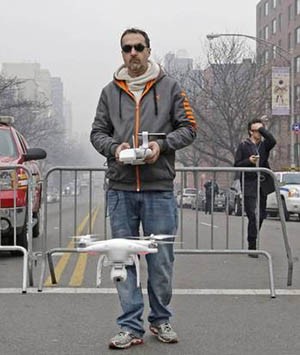 For now the recreational drones will follow the recommendations of “the Task Force co-chaired by Earl Lawrence, a top FAA drone official, and Dave Vos, head of the drone-delivery project at the Google parent Alphabet Inc. to register all recreational drones.  Other members of the Task Force included representatives from the largest airline-pilots union, an association of airport executives, consumer-drone makers like SZ DJI Technology Co., and companies that want to use drones in their businesses, like Amazon.com Inc. and  Wal-Mart Stores Inc. “

Formed in 2006 and supported by the Chinese State Government, SZ DJI Technology Co, which is headquartered in Shenzhen China made a rapid dominance of this simple technology. As in the basic launch product strategies of China’s Communist “free enterprise models,” patents are immediately re-engineered, and massive resources are inputted into a manufacturing process with the goal to dominate the US and global markets even before the recreational drones were allowed to fly by hobbyist. Since the global distribution channels of US companies, such as Amazon/Walmart, are willing to accept Chinese mass produced aerial drones, all SZ DJI had to do was massively export their devices to drive competition and prices down. To legitimize the company, Palo Alto Venture-capital firm Accel Partners invested $75 million in the Chinese company. Accel was an investor in Facebook. For over fifteen years, US Silicon Valley venture capital firms have been the key agents in developing China’s economic wealth, and high technology military infrastructure.  No USA manufacturing jobs were ever created except in China. Also, were ITAR regulations completely ignored by the US State Department? Clearly, drones have a military capability in any renewed land war with the PLA.