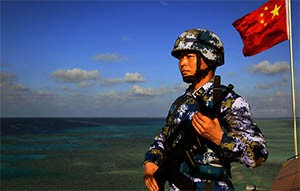 U.S. satellite and aircraft surveillance imagery shows China has positioned weaponry on one of the artificial islands it is developing in the South China Sea, American officials said, supporting their suspicions that Beijing has been building up the reefs for military purposes.  China follows a fait accompli approach to its 800 mile territorial claims and will use military platforms to enforce the Chinese Communist Party’s new offensive and defensive strategy.  The U.S. imagery detected two Chinese motorized artillery pieces on one of the artificial islands built by China about one month ago.  (The DONAR Self-Propelled Artillery Gun is shown for illustration only and is not used by the PLA)

It is now clear that the reclaimed islands are not for civilian use but instead military.  The foreign policy of the Obama Administration is to have “cooperative military engagements” with the Peoples Liberation Army (PLA) and the Peoples Liberation Navy (PLAN) so as not to risk U.S. and EU industrial investments in China’s factories. China plans grow from “world’s factory” to the leading manufacturing power by 2025.   “It needs to be emphasized that the Nansha Islands is China’s territory, and China has every right to deploy on relevant islands and reefs necessary facilities for military defense,” said Zhu Haiquan, the spokesman for the Washington Chinese embassy. “However, the facilities on relevant islands and reefs are primarily for civilian purposes.” U.S. Defense Secretary Ashton Carter commented in April 2015, “We and many other countries are deeply concerned about some of the activities China is undertaking,” during a speech at Arizona State University’s McCain Institute. “Its opaque defense budget, its actions in cyberspace and its behavior in places like the South China Sea raise a number of serious questions.”  According to a Dow Jones report, “Mr. Carter has called for “a lasting halt” to the land reclamation by China and others in the South China Sea, noting that the U.S., unlike China, is not staking any land claims in the region, but is seeking stability. The U.S. has been flying Navy surveillance planes near the artificial islands and has monitored them using reconnaissance satellites. U.S. and allied officials previously have said China has built radar installations and landing strips on the artificial islands. U.S. officials said they first detected the artillery pieces on an island about a month ago. “We’ve been aware of these for a little while,” a senior U.S. official said. American officials said that the equipment more recently has either been removed or purposely obscured from view by the Chinese. It was unclear how or why the equipment was no longer visible.”

Mr. Zhu, the Chinese embassy spokesman, said China’s activities on the islands and reefs “are aimed at first and foremost improving the working and living conditions for personnel stationed there and better fulfilling China’s relevant international responsibilities and obligations,” he said. 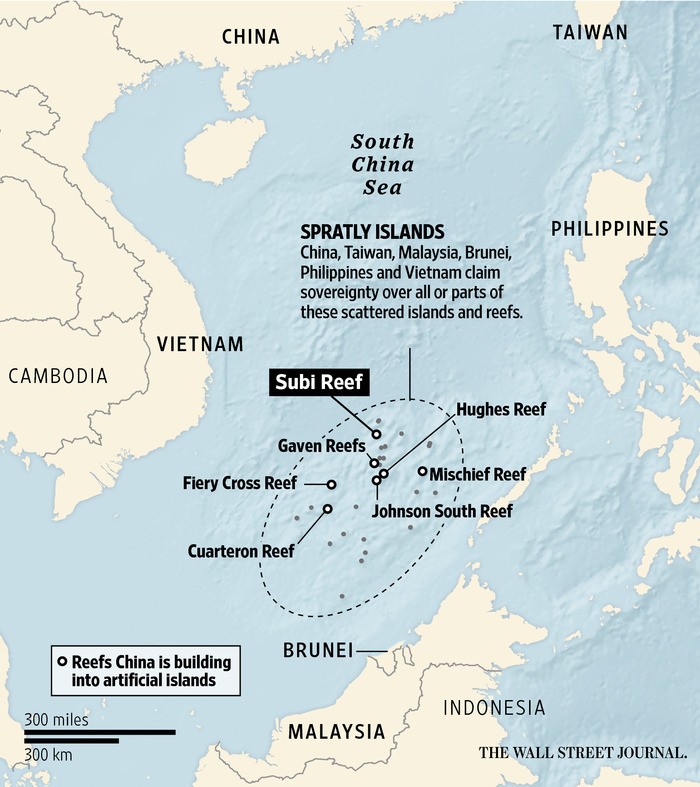 “The Pentagon confirmed earlier this month that Beijing has built a total of 2,000 acres of new land mass across seven islands. About 1,500 acres of that total were created since January, defense officials have said. John Kirby, the State Department spokesman, declined to comment on the surveillance pictures, but said that Secretary of State John Kerry had given a clear warning to China; namely, “We oppose upgrades or militarization of outposts in disputed areas of the South China Sea. We ask all claimants to show restraint and halt reclamation in favor of diplomacy.” Clearly, a real confrontation is brewing between the U.S. Navy and China’s Navy in the very near future. One wonders if there is installed by White House a red phone for China’s President Xi Jinping instead of Russia’s Vladimir Putin.