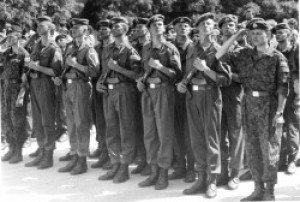 Consisting of NATO trained 5,000 personnel, Iron Wolf is comprised of brigade headquarters with its subordinate Reconnaissance, Logistic, HQ and Signal Companies and five battalions.The motorized Infantry Brigade ”Iron Wolf" was originated in June 1990 with the formation of separate Defense Squad, which was followed by the formation o a Honor Guard Company the same autumn. These units defended the Parliament of the Republic of Lithuania, the Media House, TV tower and other key establishments of the state against of the (peace keeping) operations of the Soviet Army on January , 1991.Today the country Lithuania with a population of less than 3millioin is a country and the southernmost of Europe’s Baltic states, a former Soviet bloc nation that borders Poland, Latvia and Belarus. Service engaged troops' preparation is conducted continually; volunteers' training is conducted when they are called up for service, 20 to 50 days. 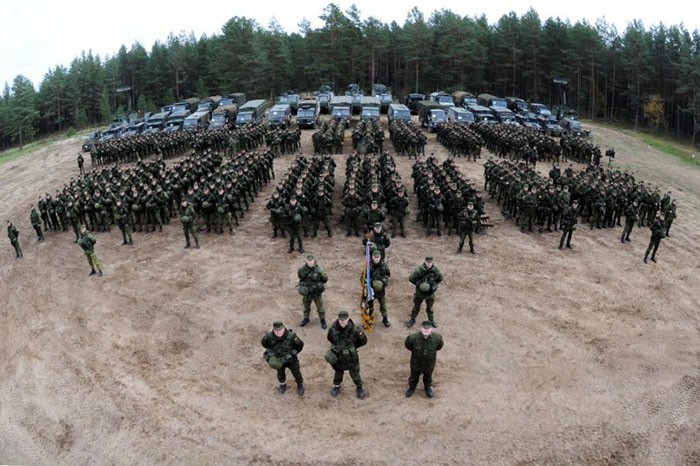 The standard service assault rifle of the Lithuanian Armed Forces is the Heckler & Koch G-36 KA4, and the standard pistol is the Glock 17. The Special Operations Forces are equipped with a variety of weapons, including MP-5 submachine guns with various modifications, G36K carbines and sniper rifles. The Lithuanian Armed Forces are also equipped with machine guns, including the GPMG MG-3, the FN MAG, and the 12.7mm (.50 cal.) M-2 QCB. They also employ AT-4 and Carl Gustav anti-tank grenade launchers, H&K GMG high-velocity grenade launchers, and low-velocity AG-36 under-the-barrel grenade launchers, in addition to light and heavy mortars and Howitzer M-50s.

Lithuania continues to maintain anti-tank defense (Javelin) and mine clearance capabilities. The importance of air defense and protection against nuclear, biological and chemical weapons and other capabilities will not decrease in the future.

The short-range Stinger Air Defense Missile System has replaced the SA-7. The contract covered eight vehicle-mounted launchers and 69 RPM/Block 1 international missiles. Portable radar systems were included, as well as training and logistics support. The Lithuanian Air Force (LTAF) is an integral part of the Lithuanian Armed Forces. The LTAF is formed from professional military servicemen and non-military personnel. Units are located at various bases across Lithuania. The LTAF Headquarters and the Air Space Surveillance and Control Command are located in Kaunas, while the Air Space Control Centre is stationed near by in Karmëlava. LATF Air Base and Air Force Armament and Equipment Repair Depot are located in Šiauliai . The Air Defense Battalion, formed in 2000, is located in the Šiauliai District. The strength of the Lithuanian Air Force is currently some 1000 professional military servicemen and non-military personnel.” Under the guidance of the US military, “The development of the LLF is based on NATO standards; current efforts focus on enhancing the Force's operational effectiveness and strengthening abilities to act together with Allies. The troops are improving their skills and abilities constantly while participating in different military exercises and training in both, Lithuania and abroad.”  (taken from Press National Defense Ministry of Lithuania)