NASA's OSIRIS-REx spacecraft. 9-6-16 launch on a mission to #asteroid Bennu. 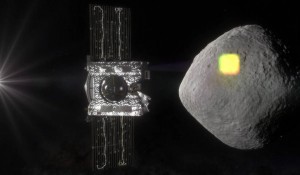 “NASA's Origins, Spectral Interpretation, Resource Identification, Security-Regolith Explorer (OSIRIS-REx) spacecraft, the first U.S. mission to sample an asteroid, will travel to the near-Earth asteroid Bennu, arriving in 2018, to survey the surface, retrieve at least 60 grams (2.1 ounces) of surface material, and return it to Earth in 2023 for study.

NASA is gearing up to launch the United States’ first mission to sample an asteroid, with activities at the agency’s Kennedy Space Center in Florida beginning Tuesday, Sept. 6, and culminating with the spacecraft launch Thursday, Sept. 8. Various activities are open to media and will air live on NASA Television and the agency’s website.

Live coverage of the OSIRIS-REx mission launch will begin on NASA TV and the agency’s website with the start of cryogenic tanking of the Atlas V rocket, and conclude approximately one hour after launch.

OSIRIS-REx will be the first U.S. mission to sample an asteroid. OSIRIS-REx will travel to the near-Earth asteroid Bennu, arriving in 2018, to survey the surface, retrieve at least 60 grams (2.1 ounces) of surface material, and return it to Earth in 2023 for study. Analysis of the sample will reveal the earliest stages of the solar system’s evolution and the history of Bennu over the past 4.5 billion years.

To learn more about the OSIRIS-REx mission, visit: