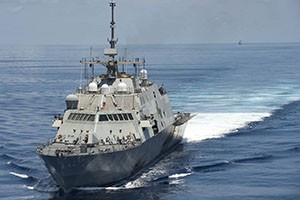 The United States maintained its position as the top arms exporter, shipping $23.7bn of equipment, ahead of Russia on $10bn. In 2011, the U.S. DoD approved the sale of $30bn worth of F-15SA fighter jets to Saudi Arabia.

According to NewsCorp., Saudi Arabia wants to buy four vessels based on Lockheed’s high-speed littoral combat ship, which is built at a yard in Marinette, Wis., and designed to operate in shallower waters.The proposed deal would be one of the largest-ever overseas defense orders, and would reduce concerns among some investors that export opportunities are being curtailed by the strength of the dollar and the collapse of commodity prices, which has reduced the spending power of big military customers in the Middle East, Asia and elsewhere. Lockheed is also pursuing a multibillion-dollar deal to sell a missile defense system to Qatar, which it hopes to conclude in 2016.