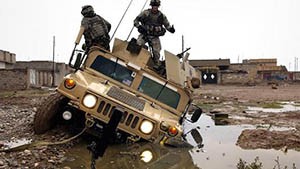 -likely to mount a protest of the award in September 2015

Oshkosh Corporation of Oshkosh Wisconsin, historically a minor player in the U. S. Defense Procurement Industry, gained the $6.75 billion contract to build 16,901 Humvees.  “All told, the Army-led program will provide 49,100 vehicles for the Army and 5,500 for the Marine Corps.” The Wisconsin based company will take over the contract of LMC and AM General to build out  into 2040 close to 55,000 Joint Light Tactical Vehicles, or JLTVs.  Under Ashton Carter, the new Secretary of Defense, and Chief of Staff of the Army General Mark A. Mille, the U.S Army cancelled helicopter, artillery, and communications contract programs resulting in billions of dollars being wasted. The U.S. Army force was cut by over 40,000 troops in 2015. In the wake of the Army’s colossal, ambitious and ultimately failed Future Combat Systems program, Brad Curran, of Frost & Sullivan said, “I think what they’re thinking is the civilian world can help us reach our goals, and we can leverage their research and successful technologies. That’s definitely an Army goal.” 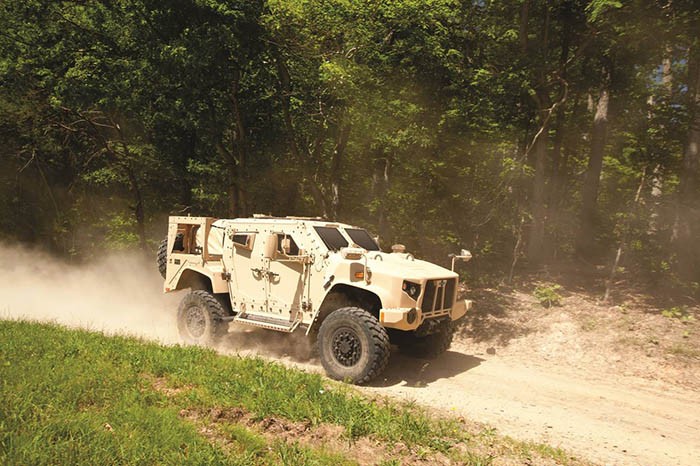 According to Defense publications, “the (U.S.) Marines plan to operate and sustain its 13,000 Humvees after replacing 5,500 with the JLTV, and the Army plans to study in the next six months how many of its 120,000 Humvees will be replaced, sustained or modernized, as it decides the vehicle mix in its fleet. As yet there are no plans for the Army National Guard to adopt the JLTV to replace its Humvees, which AM General is contracted to recapitalize.”  Further, according to Kevin Fahey, director of systems engineering and integration in theOffice of the Assistant Secretary of the Army for Acquisition, Logistics and Technology, “the Humvee will not vanish from the Army’s fleet overnight. The JLTV is not a one-to-one replacement for the Humvee, and even replacing half the Army’s Humvees at the expected rate of production would take 25 years.”

The JVLT program was introduced in 2007 and per unit cost soared to “$399,000, taking the total 2015 award program cost to $30 billion (over the period of the contract).” Oshkosh uses engines from the union (UAW) controlled and tax-payer bail-outed company General Motors and with Allison Transmission Holdings Inc. supplying the gearboxes.

Oshkosh began its history by rushing to produce Mine-Resistant Ambush-Protected vehicles that it introduced in Iraq and Afghanistan. The new designed four-wheeled truck will carry two or four personnel that is resistant to mines and roadside bombs, and are light enough to be carried by a CH-47 Chinook, CH-53 heavy-lift helicopter and by amphibious vessels — a near impossible proposition for the heavy MRAP.  “It’s a historic win for us,” Oshkosh Chief Executive Charles Szews said in an interview, adding that the defense business “supports the whole infrastructure for the company.”  Prior to manufacturing vehicles for the U.S. Department of Defense, the company was known for firetrucks and cement mixers.

LMC and AM General are seen as appealing the award. According to Aaron Mehta, “the competitors have a 10-day window from the award date to protest to the U.S. Government Accountability Office, or they may request a detailed briefing from the government within three days. That sets off an alternate timeline that gives the government five more days to hold the debrief, and the companies would have a seven-day window after that to file a protest.” Time will tell if the “giant U.S. Defense player” will simply walk away from a $90 billion dollar cash flow stream.