Now that the technology is available and ready. LMCO prepares for its journey to the Red Planet. 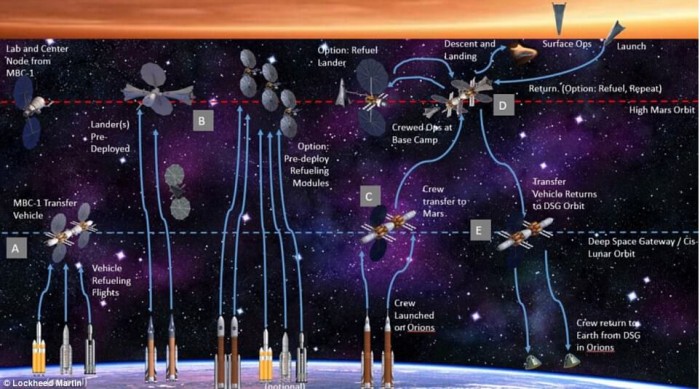 Known as Mars Base Camp, this proposal involved establishing a crewed vehicle in Martian orbit from which astronauts could perform excursions to Deimos and Phobos, and could also perform telerobotic exploration of the Martian surface, including sample return. This concept presented a novel, practical, and affordable path to enable human exploration of the Martian system in the next decade. This paper will detail additional development for the Mars Base Camp concept, including the production of propellant from water, additional details for the cislunar proving ground missions, and a Mars lander concept. The orbiting base camp could generate oxygen and hydrogen from water via solar-powered electrolysis. Water may be provided directly from the Earth system or via in-situ resource production in the lunar, Martian, or other systems. The demonstration of Mars Base Camp capabilities at the Deep Space Gateway will be discussed, including systems, technology and scientific mission possibilities. The lander is envisioned as a fully reusable, lifting body that uses supersonic retro-propulsion to descend and land on the surface. Initial crewed missions using the lander, which would follow on later missions than the initial mission, are outlined as relatively short-duration, science-focused exploration missions. Multiple areas of the Martian surface would be explored with the objective to gather scientific data from a wide variety of sites of interest, and more fully characterize possible sites for future permanent settlements. Once a surface mission is completed, the lander returns to Mars Base Camp as a single stage to orbit launch vehicle to be refueled. With these additional developments, the Mars Base Camp concept can be seen as a core system that pivots humanity into a viable, sustainable long-term Mars exploration program.” 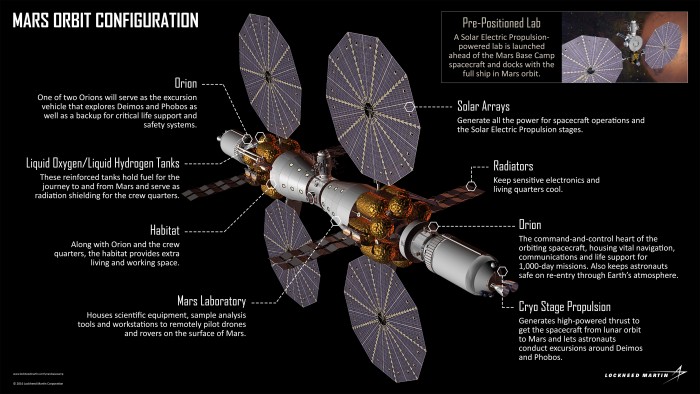 “The first Mars Base Camp mission would only see crew operate in Mars orbit, MBC can naturally evolve into a true “base camp” from which crewed missions to the surface of Mars are launched. Via the addition of a reusable lander / single-stage-to orbit launch vehicle and a fuel supply module to support it, MBC can form the core of an architecture that enables a vision of humanity’s first steps on Mars. Instead of having to commit crew to a long-duration stay at a single location on Mars, surface sorties from MBC are flexible, with the ability to visit multiple surface sites in a single, year-long mission, and provide multiple opportunities for the crew to return early to the orbiting base camp in the event of a problem on the ground. The short-duration, scientific research sorties in MBC-S can gradually evolve into longer duration sorties for the construction of more permanent settlements. MBC can therefore be seen as the core system that pivots humanity into a viable, sustainable long-term Mars exploration program. Testing and proving the technologies and processes for telerobotic operations, including sample return and analysis, at the Moon using the Deep Space Gateway is critical to the success of the MBC scientific missions. The knowledge in how to incorporate telepresence and multiple modes of operations into a rover as well as the astronaut’s workstation will carry forward into the Mars robotic missions. The Gateway will also demonstrate critical technologies, such as solar electric- propulsion. Key focus areas for further development and research to enable the architecture include demonstration of on-orbit LOX/ LH2 propellant generation, storage, and transfer, and the characterization of potential ISRU sources.”