ExoMars may change the movie “MARTIAN” into a reality 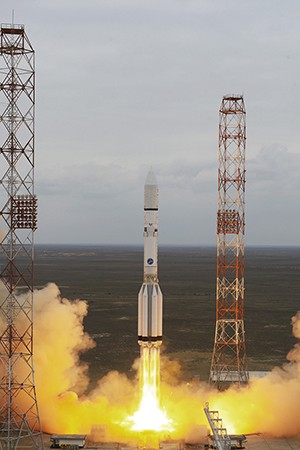 On March 14, 2016, the ExoMars mission launched by a Russian Proton-M with a Trace Gas Orbiter & Schiaparelli Entry module, and to land on Mars in October 2016. Earlier America’s NASA agreed to supply a pair of Atlas V launches as a contribution to ExoMars.

Instead under the direction of Major General Charles Frank Bolden (ret) and current Administrator, NASA retrieved all of it financial commitments to the joint ESA/Russian/US mission, and returned to its new political mission to prove Global Warming (i.e. Global Climate Change) and to improve relations with the Moslem world.

Mission: To discover the origin of Mar’s methane, and ascertain whether it may indicate signs of past or present life and to influence the choice of landing sites of future Mars missions. Also, if positive, then to plan joint Russian and European human habitats on Mars as a “staging area” for further travel beyond the current solar system.

Description: “Dubbed ExoMars, the two-pronged mission will send a methane-sniffing satellite, landing demonstrator and a rover equipped with a drill to dig further into the mystery of trace-gas sources on Mars. The first leg launched on March 14, sending the ExoMars Trace Gas Orbiter (TGO) and a small entry, descent and landing module (EDM) toward the Martian surface.

Lifted atop a Russian Proton launch vehicle from the Baikonur Cosmodrome in Kazakhstan, the TGO is expected to enter Mars’ orbit…, where it will release the 600-kg (1,300-lb.) EDM—dubbed Schiaparelli…that is aimed at proving technologies European officials say they will need for future planetary missions. The lander also carries a science package equipped with a suite of instruments that will take measurements of the Martian environment, though Schiaparelli’s reliance on internal batteries for power will limit its lifetime… ExoMars 2016 marks the first half of a (project) that is also expected to launch a rover and carrier module equipped with a science suite to Mars in 2018. “ However, the timing of that mission, which like the 2016 one will be a joint ESA-Roscosmos endeavor, …may be delayed to 2020. Some concerns were expressed that ExoMars 2018 might not reach its Mars’ launch window. 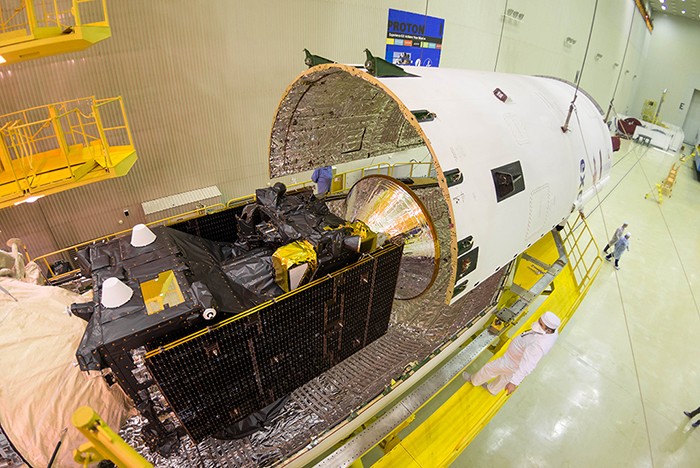 “A small suite of science instruments aboard the Schiaparelli lander will likewise be used to study the local environment during descent and immediately after landing, which will take place amid a season of global dust storms on Mars. Its measurements will include the first to be made of atmospheric particle charging effects, which could help scientists understand the origins of Martian dust storms… A camera will take 15 monochrome images during the Schiaparelli’s descent, to provide engineering insight into the landing process and help identify the actual landing location. Schiaparelli cannot take images from the surface of Mars yet another poor design element.A European camera known as Cassis will gather stereo images at visible wavelengths and characterize features on the Martian surface that may be related to trace-gas sources geological in origin, such as volcanoes. And Russia’s Frend neutron detector will map subsurface hydrogen to a depth of 1 meter to reveal water-ice deposits hidden just beneath the surface.”

“After separation in October 2016, TGO will enter into an elliptical four-day orbit around Mars that will range between 250-100,000 km (155-62,000 mi.). In January 2017, TGO will perform two significant maneuvers. The first will increase the satellite’s orbital inclination with respect to the Mars equator to 74 degrees. This maneuver will allow the probe to image the entire planet as well as the equatorial regions where Schiaparelli is targeted to land. The second phase will take up to (12 months) and comprise hundreds of aero-braking passes, a process that involves descending at the orbit’s lowest point such that it (parallels) the upper atmosphere. Every time the spacecraft flies through this part of its orbit, it will be slowed slightly by air drag. After many hundreds of such orbits, it will gradually arrive in its circular science orbit 400 km above the surface. Schiaparelli is scheduled to separate from the TGO spacecraft on October 16, 2016… Since it takes 10minutes for the signal to Mars and then the Earth. Due to the communication technology, the lander will not be guided by ground controllers, the landing sequence will be done automatically. NASA’s Electra transponder serves as a data relay system for ExoMars and future missions to the red planet. Electra will also relay data from NASA’s Curiosity and Opportunity rovers currently on Mars.At 12 hours’ post-separation, the TGO will perform a course-correction to avoid entering the atmosphere. The lander will take approximately 6 minutes to reach the surface of Mars.”

“Roscosmos chief Igor Komarov did not specify the issues facing the Russian contribution to ExoMars 2018, which is more substantial than for the 2016 leg of the mission. Russia is providing a Proton vehicle for both parts of the campaign, but for the rover portion it is also sending a carrier module and landing platform that will spend one Earth-year imaging the landing site, monitoring the climate, investigating the atmosphere and analyzing the radiation environment. The platform will also study the distribution of any subsurface water at the landing site and perform geophysical investigations of the internal structure of Mars.Komarov also said the Russian contribution to the second leg could face challenges in meeting the current schedule. “There are some constraints with the launch in 2018,” Komarov said.

TGO is carrying four instruments, including two spectrometers; namely, ACS and Nomad operating in the near-to-thermal-infrared and ultraviolet, visible and near-infrared, respectively. Together, the Russian and European spectrometers will take a detailed inventory of trace gases in the Martian atmosphere, and will monitor seasonal changes in its composition and temperature.”

“TGO’s successful arrival at the planet will mark the second time ESA has placed a spacecraft into orbit there, following the Mars Express undertaking launched in 2003 and led by ESA and industrial prime contractor Airbus Defense and Space, formerly EADS-Astrium.

ESA’s contribution to the 2018 mission is a Mars rover in development at Airbus Defense and Space in the U.K. The vehicle’s drill is designed to dig as deep as 7 feet beneath the surface in search of traces of past life. As the first rover to both roll across the Mars and drill into it, ESA said the robotic probe will advance investigations by burrowing much further than previous Mars missions. Prime non-American contractor Thales Alenia Space of France and Italy budgeted $1.4billion USD for the ExoMars’ campaign approved several years ago and now divided into two launches owing to weight and size constraints. “It’s been a long journey getting the first ExoMars mission to the Launchpad, but thanks to the hard work and dedication of our international teams, a new era of Mars exploration is now within our reach,” Woerner says. “I am grateful to our Russian partners, who have given this mission the best possible start today. Now we will explore Mars together.”

With the US’s policy to bring economic pain and thus withdrawing support for this key Mars exploration, Russia has since stepped in to fill the breach, becoming a full partner with contributions well beyond the provision of two (Proton) rockets. However, ESA has said for some time that funding the robotic campaign would prove challenging. “It’s a tight schedule,” ESA Director General Johann-Dietrich Woerner said on March 13, 2016 “I don’t want to disappoint people if, by certain circumstance, we have to move it. But right now we are still fighting together with our colleagues in industry to do it as early as possible.”

Buzz Aldrin, in his new book Mission to Mars: My Vision for Space Exploration (2013) wrote, “Mars has been flown by, orbited, smacked into, radar examined, and rocketed onto, as well as bounced upon, rolled over, shoveled, drilled into, baked and even blasted. Still to come: Mars being stepped on.”(Amy Svitak 3-16-2016 AW&T contributed to this article)