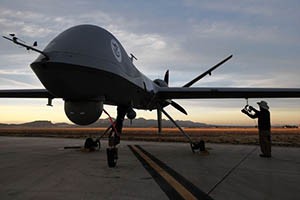 Since the beginning of warfare, military planners and generals dreamed of engineered machines to destroy military enemies first before they could inflict any destruction upon their own military forces.

In ancient Greek times, Archimedes born in 287 B.C.used catapults and hurled heavy timbers at Roman ships in the distance and designed a “death ray” consisting of mirrors that reflected the sun.  In 70 AD, the Romans laid siege to Jerusalem.  The most fearsome weapon in their armory was a massive torsion spring catapult that towered over eight meters high.  It was so powerful that it could fire boulders weighing 26 kilos over hundreds of meters to devastate Jerusalem’s walls.

In the Middle Ages Leonardo Da Vinci was a man who saw the need for military engineers, which would provide him with employment, travel opportunities, and the chance to continue his scientific work unhindered.  Leonardo, in his design for a multi-barreled cannon of 1481, sought to overcome the slow rate of fire.  Leonardo designed a (86 feet long) crossbow, (his ballista).  The weapon boasted a worm and gear mechanism to draw the bowstring and was mounted on canted wheels.  Two alternate firing mechanisms allowed the bow to release by a hammer blow or by lever action.  Da Vinci's 1487 design for an armored “tank” was made from wood and operated by eight men.

Unmanned remote-controlled aircraft have been around longer than most people think.  In 1488, Leonardo Da Vinci had also considered the possibility of an enemy using flying machines in battles, and designed weapons that would shoot them down!  In the 1900s, the German Kettering "Bug”, for instance, was developed during World War I.  A bomb-carrying unpiloted biplane flew on a pre-set course to its target.  The Germans in World War II developed the first radio-guided rockets.  In WWII, the USN returned to the idea of "assault drones" for use against Japanese warships.

An unmanned aerial vehicle (UAV), commonly known as a drone is an aircraft without a human pilot on board.  Its flight path is either independently controlled with the aid of computers inside or outside the vehicle, or under the remote control by a navigator or a Combat Systems Officer.  Today, there exists a wide variety of drones in terms of shape, size, features, and configuration, as well as classes of drones.  According to a 2012 Brandenburg University Flying Robots Report, many classes of drones exist such as the following:

• MAV (Micro Aerial Vehicle): Small UAVs with a combat radius of several hundred meters are used primarily for reconnaissance purposes and suitably equipped for this purpose with cameras and other sensors.  Drones that fall into this category are small enough to be transported and operated by one person.

• OAV (Organic Aerial Vehicle): Is a general term for an Organic Air Vehicle, in the meaning that people's senses are enhanced, for example views from the air.

• TUAV (Tactical Unmanned Aerial Vehicle): TUAVs fill the gap between short-range MAVs and the MALE / HALE systems, by combining the flexibility of smaller drones with the maximum range of larger ones.  Typical systems weigh up to 300 kg and have a range up to 300 km.  Unlike most MAVs, a special device is needed to start (for example boosters or catapults).

• VTOL (Vertical Take-Off and Landing Unmanned Aerial Vehicle): Referrers to drones with the ability to launch vertically.  Most of these drones can also, similar to a helicopter, hover in the air.  Subcategories of the VTOLs are VTOL Tactical UAV (VTUAV), which are adapted for military purposes.

A well-known application of drones is for military application.  Drones came into battlefield prominence with the beginning with the Iraq and Afghanistan Wars, as unmanned aerial vehicles (UAV) s.  They became organic, long-range artillery, and diminished the high casualties associated with troop movements within rugged exposed desert and mountainous terrains.  (UAV)s were not used in the Russia’s Afghanistan War and comparison of casualties between these two periods of wars in Afghanistan is telling.  Starting in 1979 and ending in 1989, the Former Soviet Union (FSU) lost 14,453 men, while there were between 850,000 and 1.5 million civilian Afghan deaths.  The Mujahedeen lost an estimated 75-90,000 soldier.  The Defense Casualty Report stated that “as of December 31, 2014, there have been 2,312 U.S. military deaths in the War in Afghanistan. 1,850 of these deaths have been the result of hostile action. 20,026 American service members have also been wounded in action during the war. In addition, there were 1,173 U.S. civilian contractor fatalities.”  The difference could very well be the use of U.S. engineered UAVs-a weapon platform that reached the original ancient dream of death from long distances and from the sky without causing massive casualties to U.S. troops.