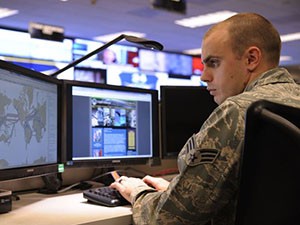 As cyber-attacks grow in scale and scope, the United States struggles to defend the IT infrastructure of the government network complex against this clear and present danger. America’s power consist of Economic, Kinetic, Cybernetic, and Diplomatic. All critical information is compromised in the name of information-sharing, which

that the US Government is demanding. On April 21, 2015, Michael Lumpkin, ASD (SO/LIC), said before the Congressional Subcommittee on Emerging Threats and Capabilities, “the current security environment is rapidly evolving with new threats and challenging dynamics.”

On September 23, 2015, the largest breaches in US history was directed at the Officer of Personnel Management (OPM) in Washington DC.  The OPM said “hackers were able to steal the fingerprints of 5.6 million people, up from the 1.1 million estimate it offered more than a month ago. More than (21.5) million people lost their records as part of the breach, and OPM’s new estimate means that roughly one-quarter of all those affected lost fingerprint data, in addition to information about their health, financial history and families. The fingerprint records were collected as part of background checks conducted since at least 2000 for some of the most sensitive government posts, including law enforcement, military, foreign service and judicial positions. Congressional lawmakers have alleged Chinese hackers were behind the attack.” According to the USAF Times, “troops, civilians, contractors subjected to background checks since the year of 2000 were exposed in the breach (social security numbers, residency and education information, employment history, health information, criminal and financial information, notes and data from investigators).” Also during the same period, US health insurers and other companies were hacked.  It is naïve to believe that the data stolen will not be traded or shared with other nations. The result is clear that future harassment, surveillance, hacking, retaliation, recruitment and identity theft will be occurring outside of the U.S. as well as here in the U.S. homeland. In this case, the U.S. Government proved that it is powerless to stop the level of sophisticated global hacking. Edward Snowden was the easiest hacker as all he had to do was take a memory storage stick and just download what he wanted.  Today, he is being elevated by the media as a technology genius who stole NSA data to protect the world.