Malaysia has miraculously transformed itself from a mainly rural society to an export-driven economy launched by satellite/space technology, knowledgebased and capital intensive industries. The cornerstone of this economic miracle has become MEASAT, a privately-held satellite broadband services corporation located in Kuala Lumpur, Malaysia.

The global average for transponder fill rates grew from 58% in 2004 to 70% by 2007. In South Asia, transponder fill rates for Ku-band capacity that could be used for DTH services continued to increase and according to Northern Sky Research will reach a high of 82% in 2009. But supply will grow at a faster rate than demand from 2010 through 2012 and the average rate will drop to 70% in 2012. The worldwide markets for Broadband Satellite Services are rapidly growing. Asia-Pacific in particular is showing a leadership position. MEASAT is demonstrating that it is becoming an innovative and visionary broadband satellite services organization. Over 180 companies are either key and niche players worldwide such as AsiaSat, Crawford Communications, Eutelsat Communications, Globecomm Systems, Inc., Hughes Network Systems, Intelsat, KT, Loral Space & Communications, Telesat, Optus, Satlynx, SES SA, SES ASTRA S.A., SES WORLD SKIES, Skyway.Net GmbH, SKY Perfect JSAT, Spacenet., Tachyon Networks, Thaicom Public Company Limited, IPSTAR Co, Ltd, ViaSat, and WildBlue Communications.

During my half day meeting with the MEASAT staff, I toured the modern Teleport and Broadcast center facility located outside of the downtown area of Kuala Lumpur called Cyberjaya. The engineers that I met were not only well trained but eager to demonstrate why their organization had the environment for them to excel. I met Dr. Ali R. Ebadi, Measat’s Senior VP of Satellite Development. His level of technical knowledge was impressive. Terry Bleakley, who joined MEASAT in 2007, originated from New Zealand and now serves as the Vice President of Commercial Operations. Terry had an extensive knowledge within the broadband alliances that MEASAT was crafting to expand the economic growth of MEASAT.

I was then to meet and interview the “Lion of Asia’s Broadband Satellite Services” who has been behind the growth of MEASAT; namely, Paul Brown-Kenyon, the Chief Operating Officer. Paul entered the conference room and we had a very cordial discussion. Paul joined MEASAT in 2003 and rose to his current position in 2004. Prior to joining MEASAT, Paul was with McKinney & Company for six years in their Singapore, Hong Kong, and Stamford Connecticut, US. Paul graduated from Yale School of Management with an MBA, an MA (Oxon) in Engineering Economics and Management from Hertford College, University of Oxford, UK. The following are my questions to some key points:

Paul, do you see a rebound in the commercial satellite business?

If not now, when will it come? We continue to see robust demand across our key markets in Asia and Africa driven by continued de-regulation and underlying economic growth. For MEASAT, this is being driven by growth in the PayTV sector. As an example of this growth, in 2005, ASTRO — our Malaysian DTH customer — was leasing four transponders from MEASAT for its platform. Today it is leasing 18 transponders across two satellites.

This growth is being matched in our video distribution business where we have expanded the reach of our network to 140 countries and developed MEASAT-3 / MEASAT-3a into a key Asian video distribution platform, especially for HD content.

What per cent of market share do you have now and what are your projections in the next 3 years?

MEASAT focuses on three key market segments: The Malaysian ICT sector where we aspire to be the satellite operator of choice; the Asian video segment, where we seek to be one of the top three operators in the region; and, the African region where today we are looking to be a provider of general satellite services. While it is difficult to provide market share projections, I think we are in a good position today and expect that position to strengthen over time.

All of your satellites were manufactured and launched abroad, when do you expect that Malaysia’s Space Agency will have the capability to build satellites and rockets, as well as launching them here in Malaysia?

The Malaysian Space Agency has high aspirations. They have stated on a number of occasions of their intention to design, manufacture and launch a geostationary communication satellite. Working with Astronautic Technology Sdn Bhd (ATSB), the country 44 APSCC Quarterly Newsletter has already demonstrated the capability to design and manufacture microsatellites for sensing and remote monitoring applications. We expect this capability to increase over time. 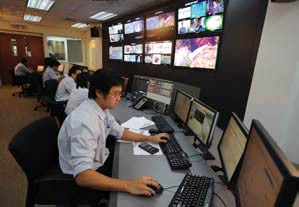 When are you planning to launch your next satellite for the expanding African market?

We have two slots that provide excellent coverage of the African region and are in active discussions with partners over their development. We expect to be able to announce concrete plans prior to the end of 2009.

MEASAT is a private company but works closely with the Malaysian Government. How do you balance these two different organizational structures?

MEASAT is a publically listed company listed on the Main Board of Bursa Malaysia. We operate as a commercial entity, supporting both private sector and public sectors in Malaysian and across the region. As with any customer segmentation, different types of customers have different requirements. Our organization is set up to meet these differing requirements.

Does over capacity currently exist? Have you reached your goal this year in high margins and high utilization rates? How do you compare your transponder prices with your competitors?

We do not believe that there is over-capacity in the region at this time for the prime satellites in the prime orbital slots. Measat-3 was launched at the end of 2006 and is now operating at close to 90% utilization rate. Measat-3a which was launched in June 2009 into the same orbital slot has already achieved 60% utilization rate, despite only having been operational for a few months. In terms of our capacity, we believe that we are priced competitively for the quality services that we provide.

It is important to have a balanced portfolio of contracts. As an example, while our average contract terms are five years, we support customers with commitments from as little as a few minutes (for Occasional Usage Services) to those who have provide us with a 15 year commitment to lease the capacity. By operating with such a balance we are able to maximize our return on investment, taking advantage of opportunities as they arise.

What do you see are the opportunities and threats ahead for MEASAT?

Today, we see significant potential in meeting the demand for satellite capacity to meet the growth in video services across the region. For MEASAT, this means meeting the demand for high quality Direct- To-Home (DTH) satellite capacity in India and across South East Asia. We also see significant potential in the African region in the near to medium term.

In terms of threats, given the long investment cycle in the industry and the lack of transferability of satellite assets (which are difficult to relocate around the region), we see the cyclical nature of the demand / supply balance as an ongoing concern. The evolution of the television business model plus with the death of broadcast type services and the rise in on-demand content; will also present a number of challenges to the industry.

When do you see a leveling off of demand and supply for transponder capacity in South Asia, and the Asia Pacific Region?

We are very bullish and do not see any leveling off of demand. SD (Standard Definition) and HD (High Definition), and DTH (Direct-To-Home) and HD demand cycles are comparable to Europe’s demand cycles. (ASTRO) All Asian Networks is a cross media group and MEASAT Broadcast Network Systems has an exclusive license till 2017 for satellite (DTH) transmission in Malaysia. ASTRO is driving Broadband Data. Our Indian and Australian Markets are demanding Broadband Data. Universal Service Provision (USP) and telecom are driving C-band.

Who are the new operators coming into the market? Are these loss leaders?

Asia is a very competitive market with over 20 Satellite operators. Within this market, you have a diverse range of companies. The newer entrants, without a track record or a strong niche, tend to have to compete for customers on pricing which can be disruptive.

What has been the shrewdest business move you have made recently?

That is a great question. I see two. The first is the focus on High Definition (HD) video distribution services in the Asian region. We decided two to three years ago that this was to be a core segment of the industry over time and invested heavily in understanding the segment and developing a viable business model. This focus is now paying off. The second was the development of our African business with the relocation, and renaming, of one of our older satellites (MEASAT-1) to 46E. As we are operating in inclined orbit under the AFRICASAT brand names, we have used it to create an important bridgehead into the African market.

Has ITAR had any effect upon your acquisition of US satellites such a Boeing, Lockheed Martin, Orbital Sciences, and Space Systems/Loral?

ITAR regulations, and their impact on the ability of our team to oversee the design and manufacture of our spacecraft, is clearly is one of a number of factors that we consider when looking for new spacecraft (along with price / capability / reliability). For our last two spacecraft, we selected US manufacturers (Boeing and Orbital) as they had the best product at the best price. If we were faced with a procurement decision where, offering identical products, we faced ITAR restrictions with one manufacturer and none with the other, I am pretty clear what our choice would be.

Would you consider SpaceX as a launch vehicle or a home grown version?

At this point in time, one of the biggest concerns in the industry is the availability of a cost effective launch vehicle. When Space-X proves itself as a reliable launch vehicle, I think it will be considered by a large number of operators for future launches. We’ve talked to SpaceX at the APSCC 2009 Kuala Lumpur Conference. I believe that they will have GEO lift capabilities in the 2011 - 2013 periods. 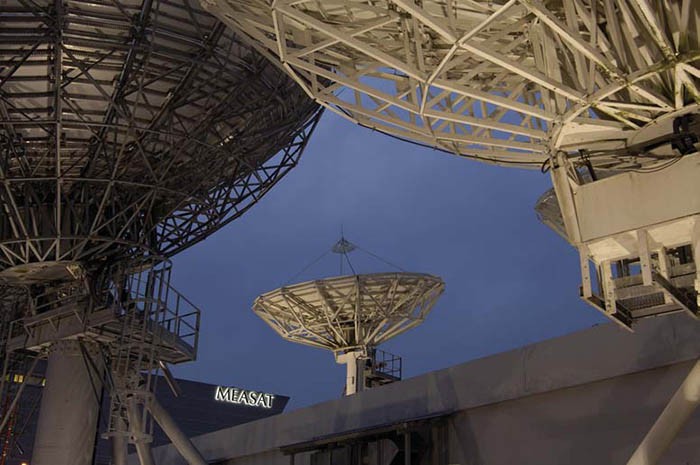 Richard Theodor Kusiolek was an early visionary of space related technologies in Northern California’s Silicon Valley architecting Digital Battlefields and the High Tech Multimedia City. Professor Kusiolek is a Faculty Instructor with the University of Phoenix and also technical writer for Via Satellite Magazine and APSCC. Professor Kusiolek is Senior Director and Director of JP Technologies Pte, Ltd. He also served as the Senior Management Consultant for India’s Metamor Corporation, China’s Huawei Technologies, China’s National Aerospace/Aviation Base, Beijing’s Satellite Conferences, and as the General Manager and Director for China’s WeSoftware Corporation.