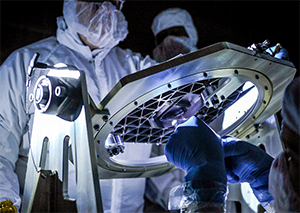 In 1610, Galileo Galilei focused his telescope into the night sky, and focused on a set of light strands.  He concluded that the Greek philosopher Anaxagorus had been correct about the Milky Way Galaxy containing stars, almost two thousand years before. Four hundred years after Galileo's discovery, NASA is almost ready to send the James Webb Space Telescope (JWST) over one million miles from Earth, and answer questions that could shake the very foundations of both scientific and philosophic knowledge.

Set to launch in October 2018, the James Webb is estimated to be over 100 times more powerful than the famous Hubble Space Telescope, with a dramatic shift toward detecting infinitesimal amounts of infrared light.  This is made possible by companies such as Quantum Coating Incorporated, who has been tasked with vaporizing gold to cover the honey-comb shaped mirrors of the Webb.   Featuring a strikingly innovative new telescope model, the James Webb will look nothing like its cylindrical predecessor.  The Hubble, which is about the size of a school bus, is being dwarfed by NASA's new launch.  The largest space bound telescope ever built, Webb will be taller than a four-story building, and as wide and long as a tennis court.  However, not only will this monolith be enormous, it will also be outfitted with highly advanced instrumentation.  Webb is designed to detect a greater range of light, with a primary focus on the infrared spectrum.  Because infrared light allows us to peer through cosmic dust, this is one major improvement that will send our knowledge of the known and unknown universe light years into the future.  Compared to the Hubble, which orbits roughly 350 miles from the Earth's surface, JWST will sail past what astronomers have titled the “Lagrange Point,” 1.5 million kilometers (roughly 1 million miles) from Earth and directly away from the Sun.  Once the Webb finishes its launch, it will “park “itself in the shadow of the Earth in a gravitationally-stable pocket of space, and orbit around that shadow for the duration of its 5-10 year mission.

Northrop Grumman, the firm responsible for the vast majority of Webb's design and construction, has managed to create the most beautiful-looking telescope mankind has ever seen.  The JWST is not your backyard telescope.  Webb's lower half is translucent, and looks as if a sword hand guard were diamond-cut and embedded with black, carbon-fiber components.  This lower half is known as “Sunshield,” and, as its name implies, it is designed to keep radiation away from the mirrors on the telescope's upper portion.  Spanning roughly 3,232 square feet (21.197 m x 14.162 m [69.5 ft x 46.5 ft]), Sunshield is a modern engineering marvel.  Five filmy sheets of Kapton (a material which DuPont developed before the first moon mission) will deploy, stretching and assembling themselves, IN SPACE, with ZERO human help.  Kapton is known to withstand a wide range of temperatures in spacecraft, but to be even safer, these incredibly slender and strong panels are topped with aluminum and silicon-doped coatings. NASA's Senior Project Scientist for JWST, John Mather, describes the material as only “thick as a laundry bag, but so tough, you cannot tear it with your fingers.”

Now onto the main hardware, astronomers and astrophysicists are all but ticker-tape parading over the spectroscopic capabilities of Webb.  Using companies such as Axsys Technologies, Brush Wellman, SSG/Tinsley, and Quantum Coating Incorporated, NASA sent its beryllium hexagon mirrors across several states in the USA for polishing, refinement, and fine tuning.  As mentioned, an oversized golf ball's amount of pure, soft gold has been vaporized and quantum sealed onto the main mirror panels.  This light will be collected in the secondary mirror, similar to the way a satellite dish will collect data in a mounted-arm receiver.  Using microshutters to disperse the light collected, NASA astrophysicist Dr. Amber Straughn lectured at Washington's Museum of Flight that Webb will analyze and transmit data that will allow humankind to literally look 13.4 billion years into the past.  This is no accident, since the very design and size of the main mirror assembly (6.5 m [21 feet 4 in.]) is exactly as wide as is needed to see light from the original expansion, when the first galaxies were formed after the “Big Bang”.

The rocket being used has a track record of 57 successful, consecutive launches.  The Ariane-5 rocket can be as tall as a 17 story building, at least 18 feet in diameter, and weigh 9.5 tons without any payload.  The rocket must reach speeds of at least 7 miles per second to escape Earth's gravity, all while protecting the sensitive telescope that is crammed within its frame.  This is no small feat, since the telescope barely fit into the same Johnson Space Center vacuum chamber used for the Apollo mission. Infrared light sensors will allow scientist to look into cosmic formations such as the “Pillars of Creation” and the famous Orion's Belt, revealing the birth of stars as mankind never been able to observe and study before.  Webb is, again, located in the Lagrange Point (“L2”), far away from the Sun.  This has many benefits for the infrared sensing NASA wishes to complete, because the mirrors will not be heated and “seeing themselves” as is the struggle with Earth-orbiting infrared technology.  Because the Sunshield is in place, the golden honey-comb mirrors will be -240°C (nearly -400°F). 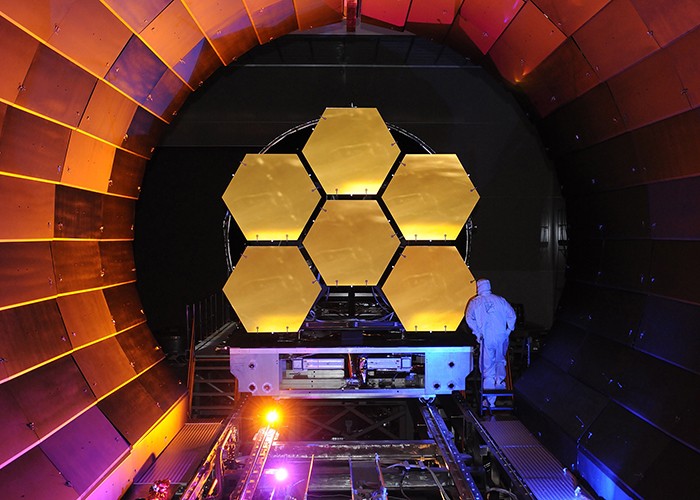 How much will JWST cost?

Apart from the time spent building, planning, and maintaining the Webb that might be spent doing other, less heroically interesting things, there is a hefty price tag associated this project.  As far back as 2011, by which time NASA had already spent $3.7 billion, NASA estimated the cost of JWST's entire life cycle to top $8.7 billion.  After launch, the cost to maintain the hardware and mission will be a mere $837 million of the total cost.  These numbers came after much deliberation and several proposals to the US Senate, that led to several reductions in both the length of the JWST mission plan and a “de-scoping” (or “demagnification”) of the instruments themselves.  Northrop Grumman even paid for the full scale model of the JWST for the initial phases of development, out of their own budget.

The James Webb Space Telescope is a global effort.  NASA, which has credited the JWST mission as a cooperative joint mission amongst the National, Canadian, and European Space Agency (NASA, ASC-CSA, and ESA) has put the responsibility for much of the finely tuned instrumentation on foreign soil, such as the NIRSpec (Near Infrared Spectrometer) and the Optical Bench Assembly.  The cooperative foreign space agencies have also contributed financially through special funding from member states, as well as through the acquisition of the Ariane-5 ECA “heavylifter” launching rocket and platform.  Not only are there scientists around the world that pine for the day they can access the data and instrumentation, the governments, agencies, and companies that make this project possible span the entire home planet.  Tested and constructed at Goddard, Marshall, and Johnson Space Centers in the USA, it might be easy to see this as a mainly American effort; however, JWST will be cared for and checked for launch from Arianespace's ELA-3 launch complex at European Spaceport, near the equator in French Guiana.  Although all parties hope for no complications during the month-long unfolding of the telescope's instruments, if there is a problem, no one will be calling for Houston.

There is a lot of work to do in preparation for launch, and even more to be done during the Webb mission.  That being said, humanity has had thousands of years to prepare the many fundamental questions James Webb seeks to answer.  Many planets that reside in the habitable “Goldilocks Zone” orbit have been discovered around neighboring stars, and even as recent as July 23, 2015 NASA announced that the Kepler Space Telescope has discovered “Earth's bigger, older cousin” in the Cygnus constellation.  Finding Earth-like planets is one of the most burning questions in the beating heart of any space agency; however, JWST could reach as far back as the origins of the universe itself.  Stephen Hawking furthered the research and concept of the Big Bang, to the point that Hawking himself is quoted to say that the Big Bang is “one of the most proven theories in all of science.”  The incredible mind and unflinching nature of Leonard Susskind inspired the scientific community to develop Quantum Theory or “String Theory.”  This is the heavily believed notion that the smallest component of all matter is minuscule strands of energy, formed at the “Big Bang”.  This also leads to the almost unfathomable concept of different dimensions, with Edward Witten changing the world in 1995 with his proposal of M-Theory, the leading concept of what happened before the Big Bang created time itself.  With the James Webb telescope literally taking our eyes unthinkable distances into the past- at light more than thirteen billion years old- it is no stretch to wonder if mankind's very concept of life itself could be on the verge of changing.

Perhaps by Christmas of 2018, millions will all be glued to their internet web browsers, watching the world confront an entirely new and less alien universe.

(August 8, 2015-Andrew A. Snider is a free-lance writer from Monterey California specializing in space technologies)