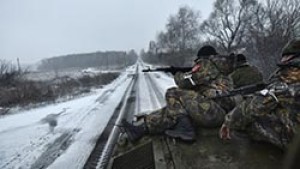 Leaders of Russia, France, Germany, Ukraine, met in Minsk, Belarus, to stop the violence in Eastern Ukraine. As of date, 5450 have been killed and thousands injured by indiscriminate artillery, rocket, and mortar attacks on the civilian population of the Donbas.

NATO and the U.S. government, in close consultation with the governments of France and Germany, have agreed to a Cease Fire Agreement. The peace agreement has more than 10 points that must be adhered to by Ukraine and the Eastern Republics of Donetsk and Lugansk. The four-way meeting with German Chancellor Angela Merkel and French President François Hollande in the Belarusian capital was the climax of a media event. European diplomatic drive aimed at stopping the worst East-West crisis since the end of the Cold War from escalating has been agreed to in February 2015. Underscoring the urgency of signing the “agreement”, the number of those reported killed in the hours before the February 10, 2015 make-or-break talks rose to at least 49 as separatist said another civilian was killed when a hospital in their bastion Donetsk was shelled as the leaders met, following the earlier deaths of 16 people in a devastating rocket attack.

The U.S. President US President Barack Obama said, "If Russia continues its aggressive actions in Ukraine, including by sending troops, weapons, and financing to support the separatists, the costs for Russia will rise.” Higher educational programs that have met with key executives Interviewed February 10, 2015 on the Real News Network, Ron Paul Institute Academic Advisor Lawrence Wilkerson warned that following the advice of “warmongers like Senator John McCain and his cohorts” to “arm majorly” the Ukraine government is “probably one of the fastest ways” to deepen, widen, and make more profound the Ukraine crisis. Wilkerson, a professor at the College of William & Mary and former US Army colonel, stated in a U.S. Media interview, “We're 6,000 miles — depending on what part of us you want to look at — we're a long way away. Instead of escalating the war in Ukraine, seek a settlement that removes foreign influence: The solution is we get together, we talk, and we agreed that we are going to take our hands, military and otherwise, off Ukraine. We probably … make a very forceful announcement that we are not contemplating NATO membership for Ukraine. And we discuss where we're going to draw the line as everybody goes back to square zero and quit shooting and killing each other.”