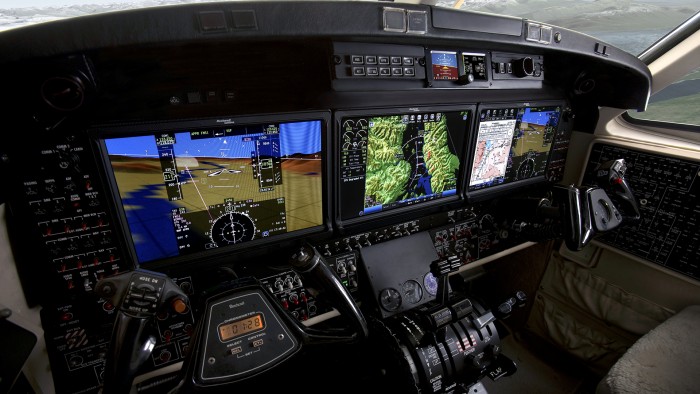 Communication and navigation products include full spectrum communication solutions for voice and data connectivity for government and military use in the air, on the ground and at sea. These communication products support military user requirements for high availability, highly secure, jam resistant wireless communication. Products include radio communication, data links, electronic warfare and networked communication systems. The navigation products are primarily comprised of global positioning system-based products used for precision navigation and targeting applications. These applications include airborne, vehicular, maritime, soldier navigation devices, precision targeting subsystems, precision-guided weapons products, range and training systems and a variety of embedded GPS applications. In 2016, 33 percent of Rockwell Collin’s sales were derived from U.S. Government contracts, both directly and indirectly through subcontracts. Defense funding by the U.S. Government is expected to continue to be under pressure due to the overall economic environment, budget deficits and competing budget priorities. Cost cutting, efficiency initiatives, reprioritization and other affordability analysis by the U.S. Government on defense spending could present some additional opportunities for us, but continued pressure on U.S. Government spending on defense could also adversely impact our Government Systems sales and profitability.

Allied Signal was an American aerospace, automotive and engineering company created through the 1985 merger of Allied Corp. and Signal Companies. It subsequently purchased Honeywell for $15 billion in 1999, and thereafter adopted the Honeywell name and identity. On November 30, 2018, the Wall Street Journal, a wholly owned Rupert Murdoch Media powerhouse that Honeywell, which makes products for the aerospace and oil and gas industries, said it would re-locate in Charlotte North Carolina would help it find new employees to support its focus on technology and software. “Honeywell is in the fourth year of a 10-year deal for up to $40 million in tax credits to stay in New Jersey. The company said it would keep about 1,000 employees in its six locations in New Jersey, and would continue to comply with the agreement. In addition to the senior-leadership jobs moving from New Jersey, Honeywell said it would move about 100 positions from South Carolina to its new headquarters by September 2019. The company said it plans to employ about 750 people in Charlotte by 2024. North Carolina state Senate Leader Phil Berger, a Republican, said, “North Carolina’s economy is booming under conservative economic policies, and people are relocating here in droves because of it.” Honeywell has 131,000 employees world-wide, including 46,000 employees in the U.S. It reported net income of $1.7 billion in 2017, according to federal filings.

“Boeing Co. BA -0.11% is creating a new unit to develop and build aircraft avionics systems, expanding its strategy of insourcing key technology to cut costs. (WSJ-12/6/2018-An automated flight-control system on Boeing Co.’s BA -5.80% 737 MAX aircraft, which investigators suspect played a central role in the fatal Oct. 29 jetliner crash in Indonesia, was largely omitted from the plane’s operations manual and was the subject of debate inside Boeing, government and industry officials say. Pilots of Lion Air Flight 610 battled systems on the Boeing 737 MAX for 11 minutes after the plane took off from Jakarta, until it crashed into the Java Sea, killing all 189 people on board. Boeing is devising a software fix and trying to reinstall confidence in the cockpit systems of the 737 MAX, which U.S. airlines have called safe.”)

The new Boeing Avionics unit will expand the aerospace company’s existing offering of electronics systems, focusing on areas such as navigation and flight controls for future commercial and military jets. The move, announced in a memo to staff Monday, takes Boeing deeper into the territory of big suppliers such as Rockwell Collins Inc. COL +2.94% and Honeywell International Inc. HON +0.48% following the recent expansion of its services business. While Boeing Avionics will focus on equipment for future products entering service over the next decade, it could also be used to produce more advanced parts for existing aircraft currently supplied by third parties. Boeing said the avionics business had been established in consultation with suppliers. Shares in Rockwell Collins extended an early decline and were recently down more than 6%. A spokesman said it didn’t expect any impact from Boeing’s move in the “foreseeable future,” and said they would continue to work collaboratively. With most aerospace sector shares down, Boeing shares continued the advance that has lifted the stock by more than 20% in July, buoyed by a firmer outlook for cash and profits.

Chicago-based Boeing already produces a range of aircraft electronics, and the new unit will have an initial staff of 120, growing to an expected 600 by 2019. The company is pursuing more vertical integration of its aircraft manufacturing business, standing up internal operations in areas such as advanced materials, propulsion systems and actuators, which move the flaps on a jet’s wings. Boeing Avionics will be headed by Allan Brown, a senior defense executive, reporting to Chief Technology Officer Greg Hyslop.”